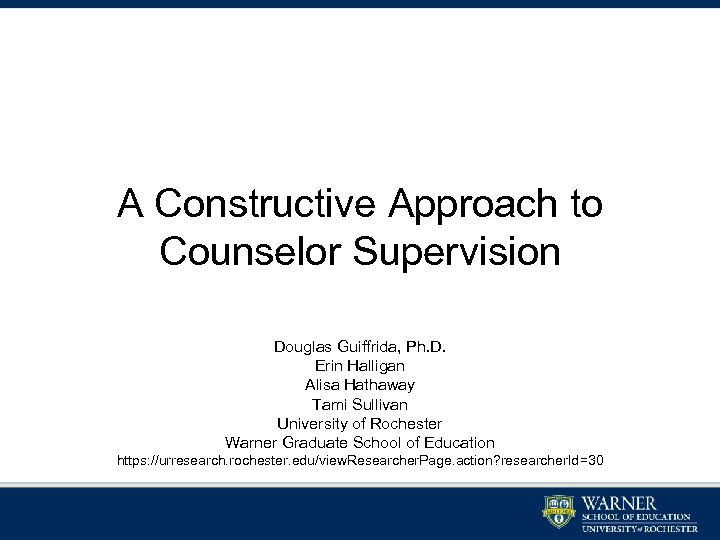 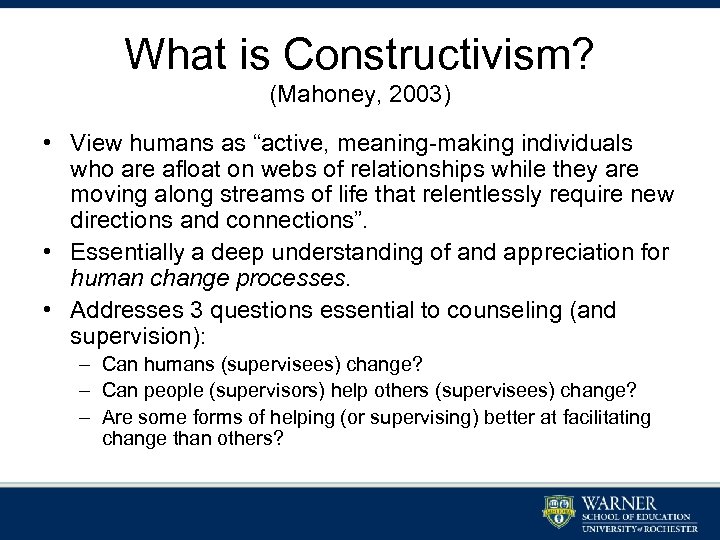 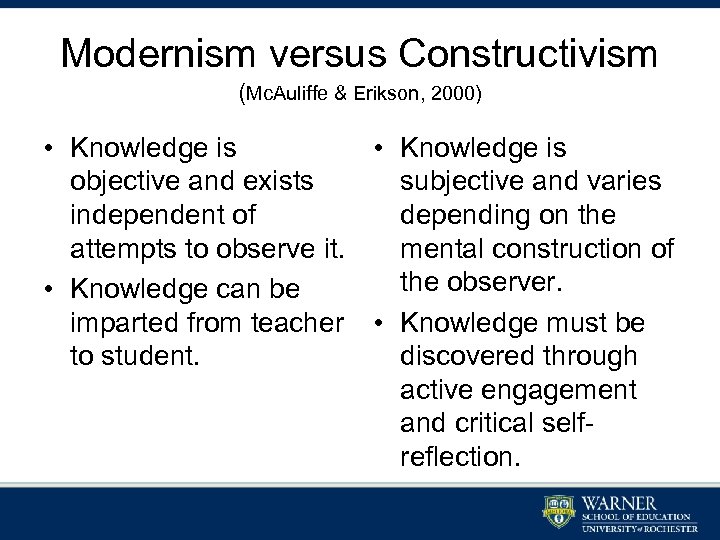 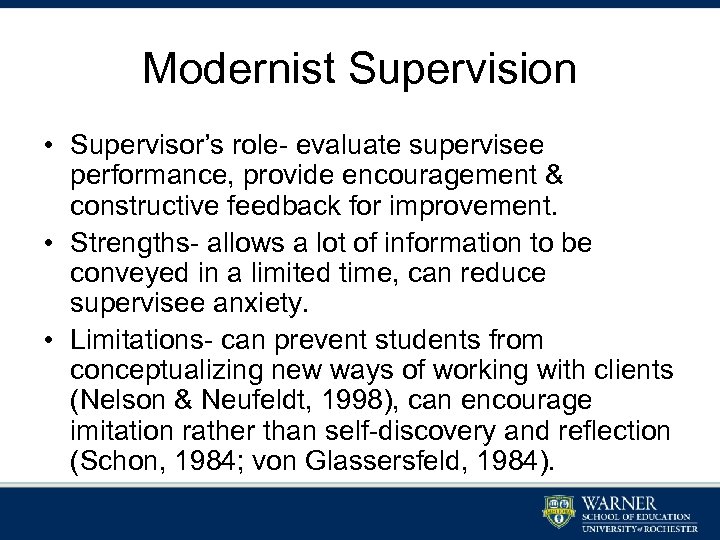 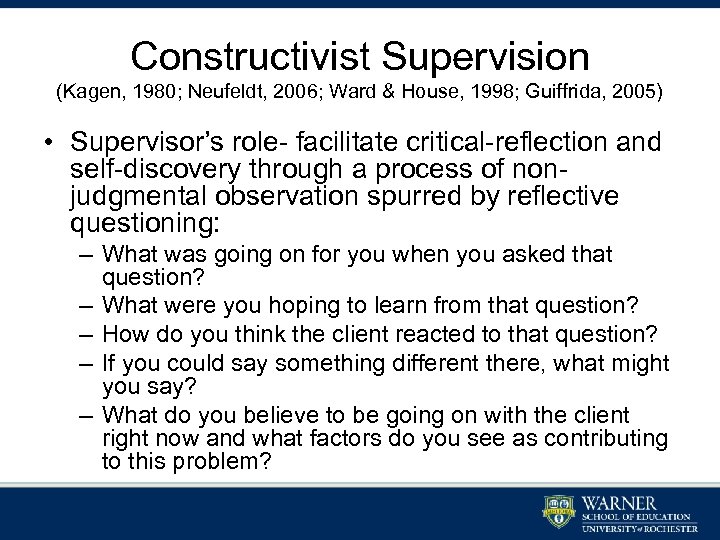 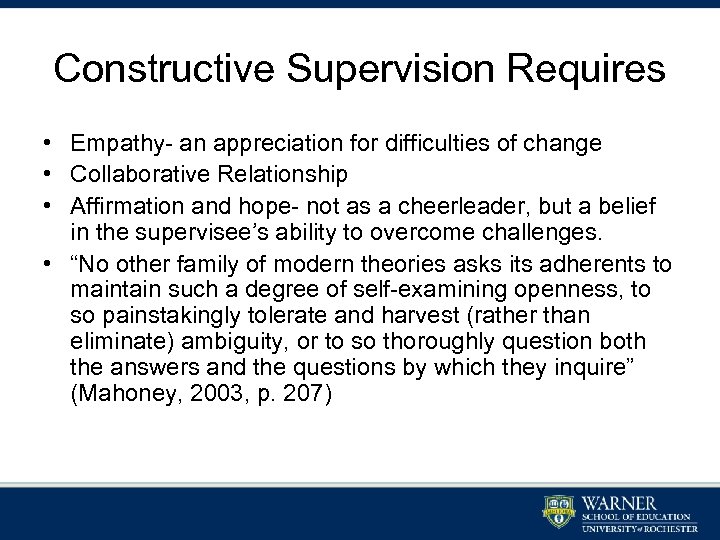 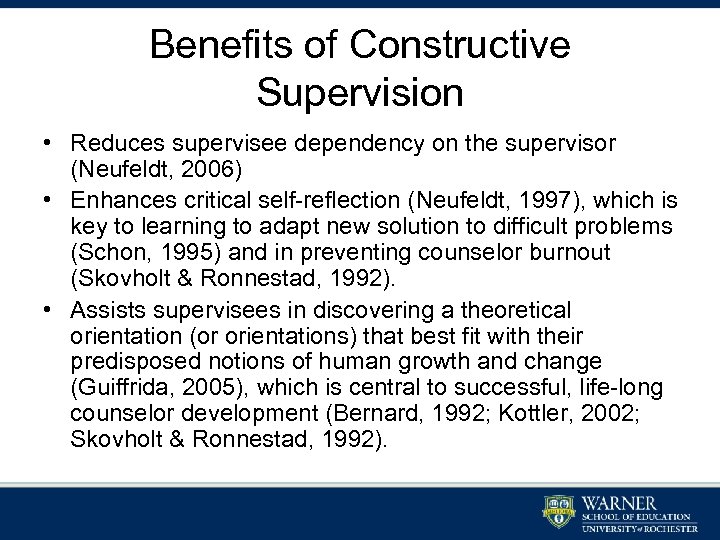 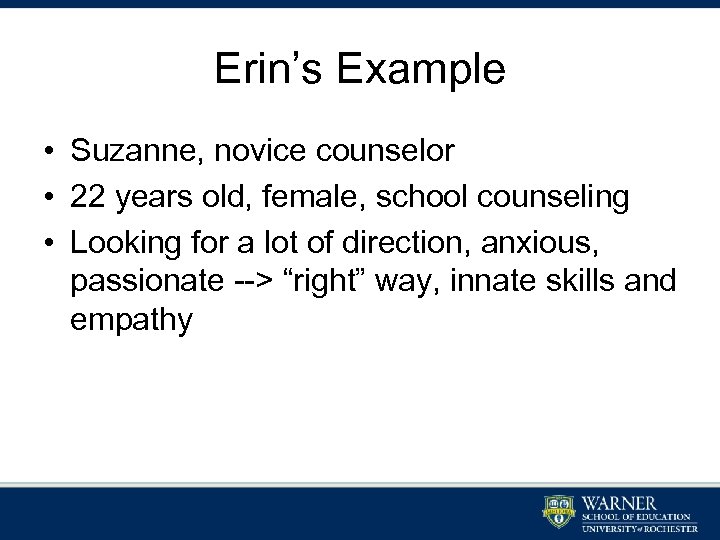 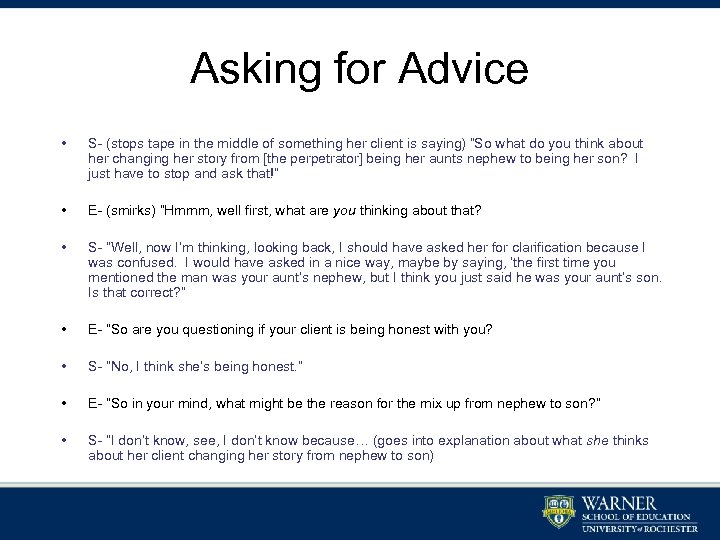 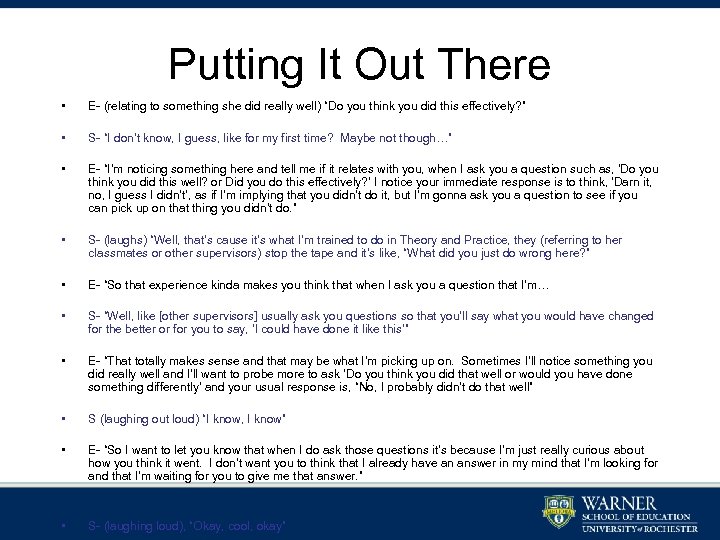 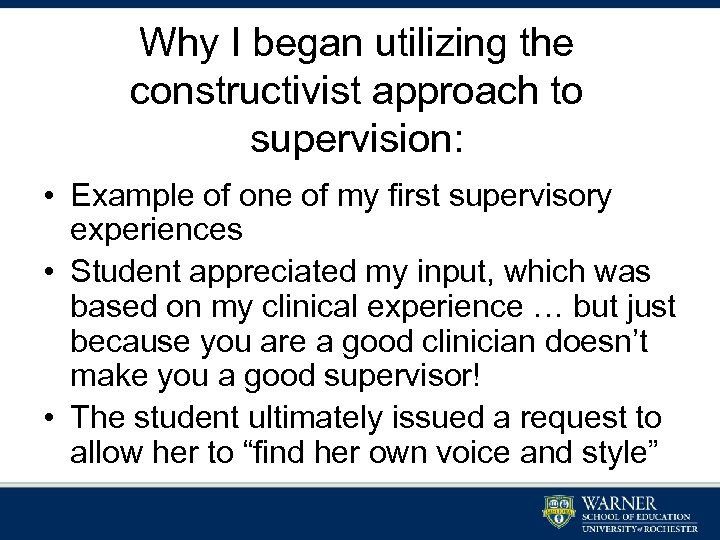 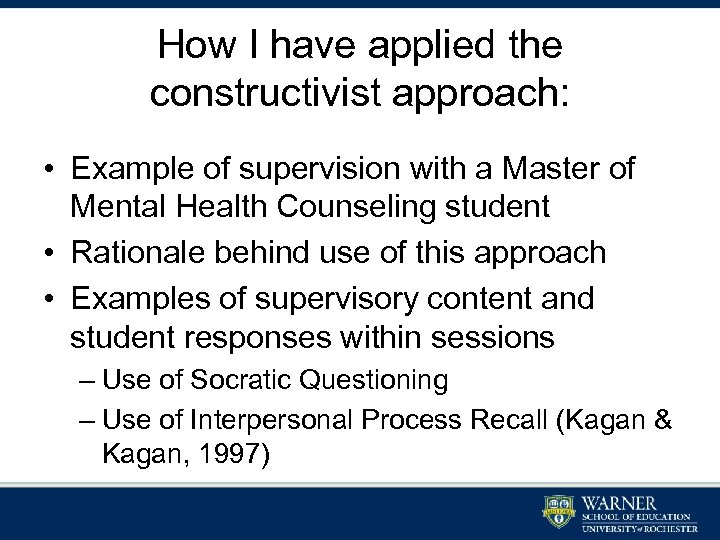 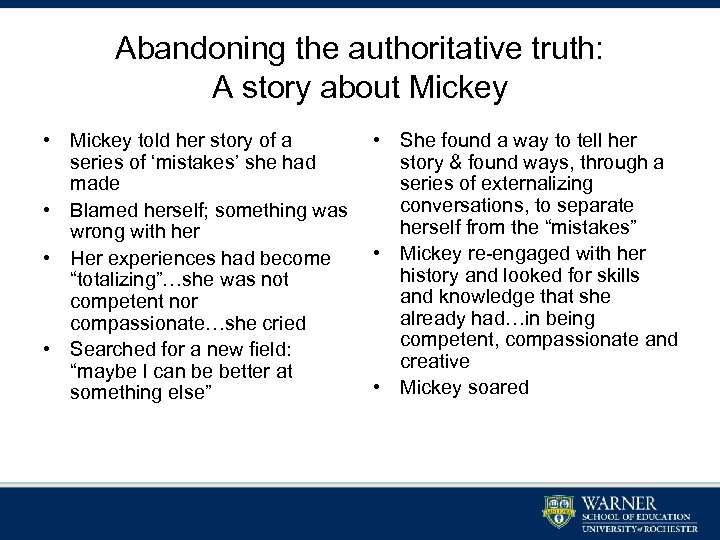 What is Constructivism? (Mahoney, 2003) • View humans as “active, meaning-making individuals who are afloat on webs of relationships while they are moving along streams of life that relentlessly require new directions and connections”. • Essentially a deep understanding of and appreciation for human change processes. • Addresses 3 questions essential to counseling (and supervision): – Can humans (supervisees) change? – Can people (supervisors) help others (supervisees) change? – Are some forms of helping (or supervising) better at facilitating change than others?

Modernism versus Constructivism (Mc. Auliffe & Erikson, 2000) • Knowledge is objective and exists subjective and varies independent of depending on the attempts to observe it. mental construction of the observer. • Knowledge can be imparted from teacher • Knowledge must be to student. discovered through active engagement and critical selfreflection.

Constructivist Supervision (Kagen, 1980; Neufeldt, 2006; Ward & House, 1998; Guiffrida, 2005) • Supervisor’s role- facilitate critical-reflection and self-discovery through a process of nonjudgmental observation spurred by reflective questioning: – What was going on for you when you asked that question? – What were you hoping to learn from that question? – How do you think the client reacted to that question? – If you could say something different there, what might you say? – What do you believe to be going on with the client right now and what factors do you see as contributing to this problem?

Constructive Supervision Requires • Empathy- an appreciation for difficulties of change • Collaborative Relationship • Affirmation and hope- not as a cheerleader, but a belief in the supervisee’s ability to overcome challenges. • “No other family of modern theories asks its adherents to maintain such a degree of self-examining openness, to so painstakingly tolerate and harvest (rather than eliminate) ambiguity, or to so thoroughly question both the answers and the questions by which they inquire” (Mahoney, 2003, p. 207)

Benefits of Constructive Supervision • Reduces supervisee dependency on the supervisor (Neufeldt, 2006) • Enhances critical self-reflection (Neufeldt, 1997), which is key to learning to adapt new solution to difficult problems (Schon, 1995) and in preventing counselor burnout (Skovholt & Ronnestad, 1992). • Assists supervisees in discovering a theoretical orientation (or orientations) that best fit with their predisposed notions of human growth and change (Guiffrida, 2005), which is central to successful, life-long counselor development (Bernard, 1992; Kottler, 2002; Skovholt & Ronnestad, 1992).

Let her try! • S- (last statement to her client before she stopped the tape) “Well, it’s really difficult when, like you said, when you’ve gone through a really hard time, um, you know, with living, uh, you know, somewhere you’re not familiar and also going through something as difficult and traumatic as a rape and to have people not believe you about that. I can see where that would be extremely difficult. ” • S- “I’m picking up on a theme of people not believing her (provides examples from what she’s heard). I don’t know if that’s something I should pay attention to, but its come up at least 3 times with this last one (the rape) being the most serious. ” • E- “So you’ve picked up on this theme. Do you believe the statement you made got at that? Was it effective? ” • S- “I think it could have been asked in a more simple way, but that’s something I’m trying to work on. A lot of times I’m too wordy. ” • E- “Hmm, so what would it have sounded like in a more simple way? ” • S- “Maybe like, ‘I can’t imagine how difficult it would be to go through this and not have anyone believe me. ’”

Asking for Advice • S- (stops tape in the middle of something her client is saying) “So what do you think about her changing her story from [the perpetrator] being her aunts nephew to being her son? I just have to stop and ask that!” • E- (smirks) “Hmmm, well first, what are you thinking about that? • S- “Well, now I’m thinking, looking back, I should have asked her for clarification because I was confused. I would have asked in a nice way, maybe by saying, ‘the first time you mentioned the man was your aunt’s nephew, but I think you just said he was your aunt’s son. Is that correct? ” • E- “So are you questioning if your client is being honest with you? • S- “No, I think she’s being honest. ” • E- “So in your mind, what might be the reason for the mix up from nephew to son? ” • S- “I don’t know, see, I don’t know because… (goes into explanation about what she thinks about her client changing her story from nephew to son)

Putting It Out There • E- (relating to something she did really well) “Do you think you did this effectively? ” • S- “I don’t know, I guess, like for my first time? Maybe not though…” • E- “I’m noticing something here and tell me if it relates with you, when I ask you a question such as, ‘Do you think you did this well? or Did you do this effectively? ’ I notice your immediate response is to think, ‘Darn it, no, I guess I didn’t’, as if I’m implying that you didn’t do it, but I’m gonna ask you a question to see if you can pick up on that thing you didn’t do. ” • S- (laughs) “Well, that’s cause it’s what I’m trained to do in Theory and Practice, they (referring to her classmates or other supervisors) stop the tape and it’s like, “What did you just do wrong here? ” • E- “So that experience kinda makes you think that when I ask you a question that I’m… • S- “Well, like [other supervisors] usually ask you questions so that you’ll say what you would have changed for the better or for you to say, ‘I could have done it like this’” • E- “That totally makes sense and that may be what I’m picking up on. Sometimes I’ll notice something you did really well and I’ll want to probe more to ask ‘Do you think you did that well or would you have done something differently’ and your usual response is, “No, I probably didn’t do that well” • S (laughing out loud) “I know, I know” • E- “So I want to let you know that when I do ask those questions it’s because I’m just really curious about how you think it went. I don’t want you to think that I already have an answer in my mind that I’m looking for and that I’m waiting for you to give me that answer. ” • S- (laughing loud), “Okay, cool, okay”

Why I began utilizing the constructivist approach to supervision: • Example of one of my first supervisory experiences • Student appreciated my input, which was based on my clinical experience … but just because you are a good clinician doesn’t make you a good supervisor! • The student ultimately issued a request to allow her to “find her own voice and style”

How I have applied the constructivist approach: • Example of supervision with a Master of Mental Health Counseling student • Rationale behind use of this approach • Examples of supervisory content and student responses within sessions – Use of Socratic Questioning – Use of Interpersonal Process Recall (Kagan & Kagan, 1997)

Abandoning the authoritative truth: A story about Mickey • Mickey told her story of a series of ‘mistakes’ she had made • Blamed herself; something was wrong with her • Her experiences had become “totalizing”…she was not competent nor compassionate…she cried • Searched for a new field: “maybe I can be better at something else” • She found a way to tell her story & found ways, through a series of externalizing conversations, to separate herself from the “mistakes” • Mickey re-engaged with her history and looked for skills and knowledge that she already had…in being competent, compassionate and creative • Mickey soared

Lincoln-Douglas Debate An Examination of Values

Other forms of tax supervision Chapter 91

Organisation & Behaviour In this session: 2. 3

Theme : The Polysemy of approaches in the