A Case of Fraud to use to Teach 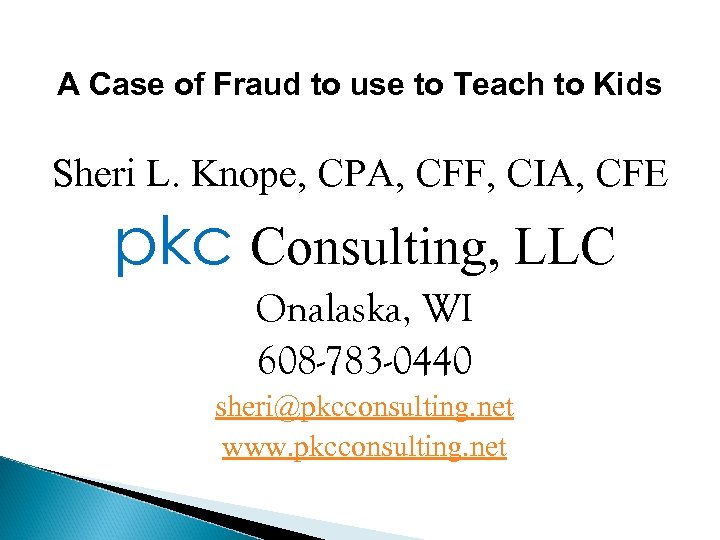 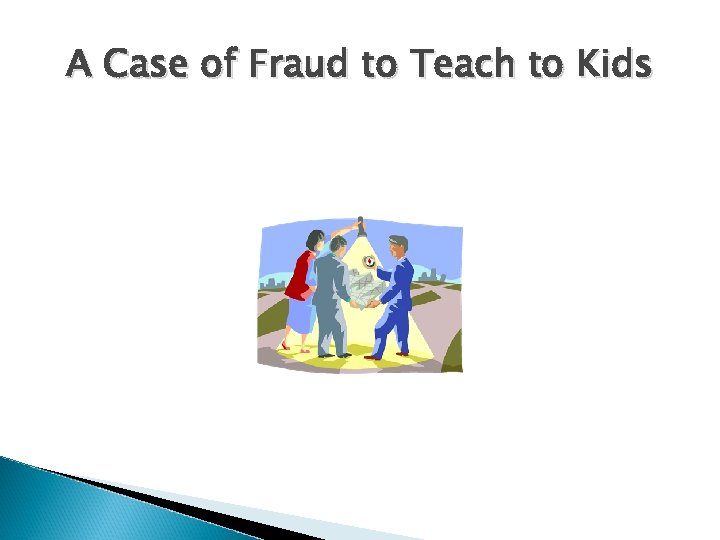 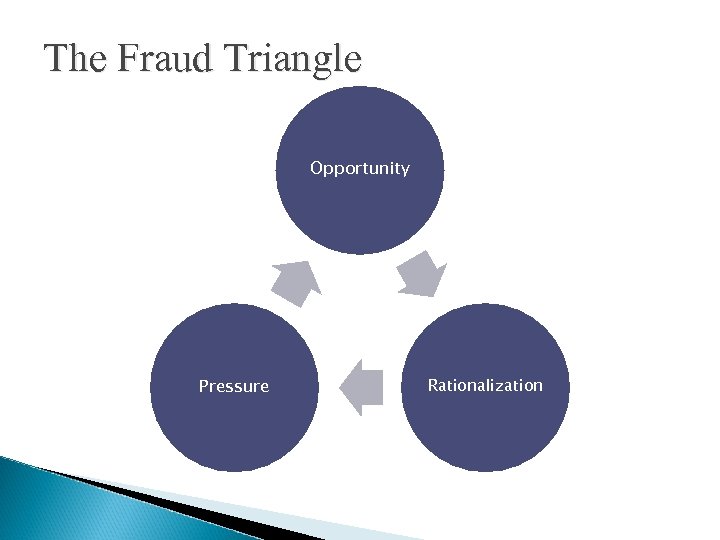 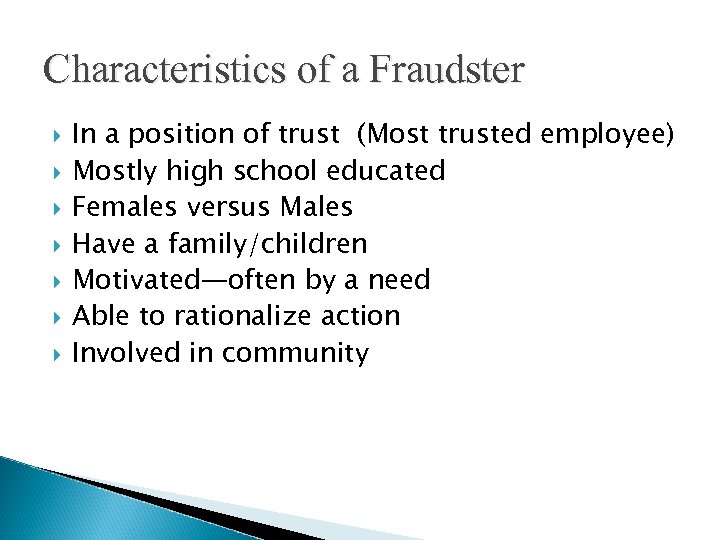 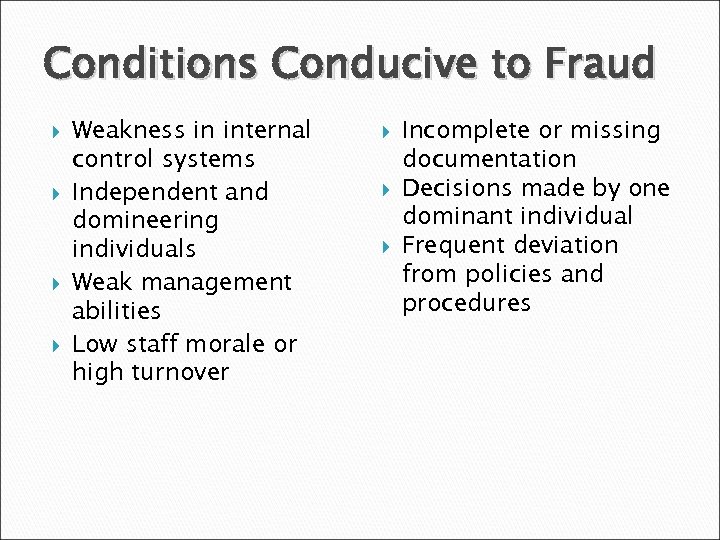 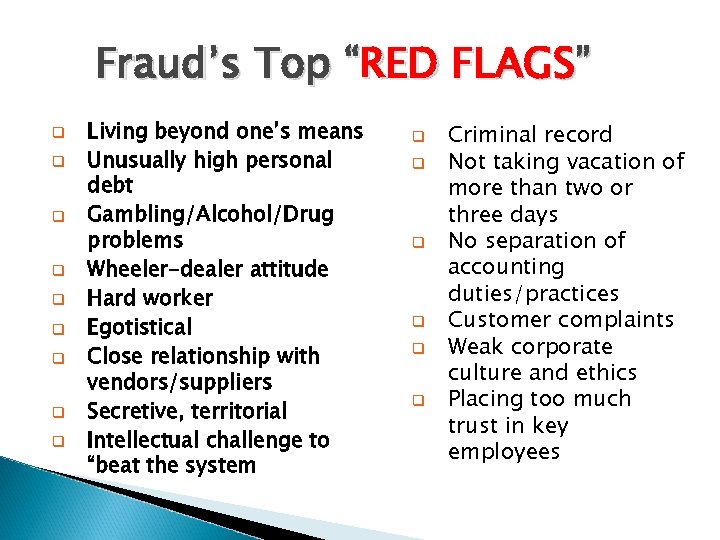 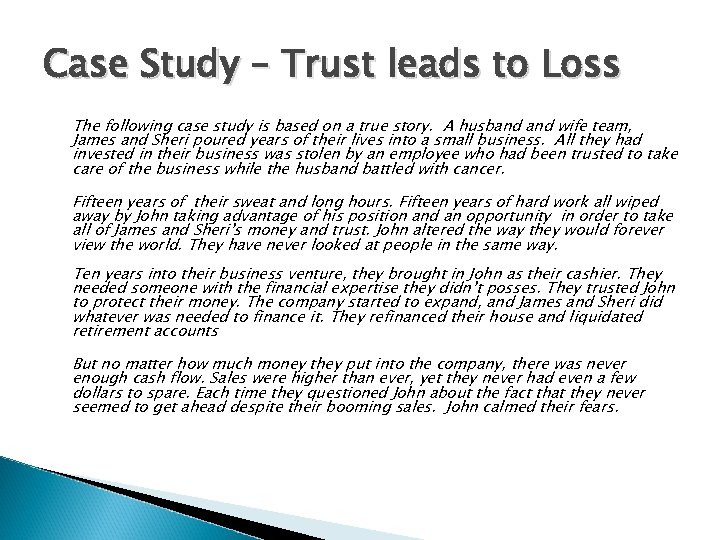 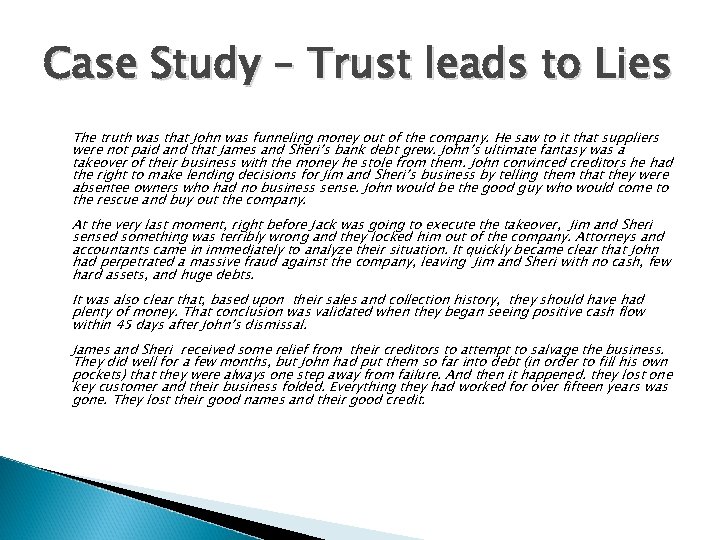 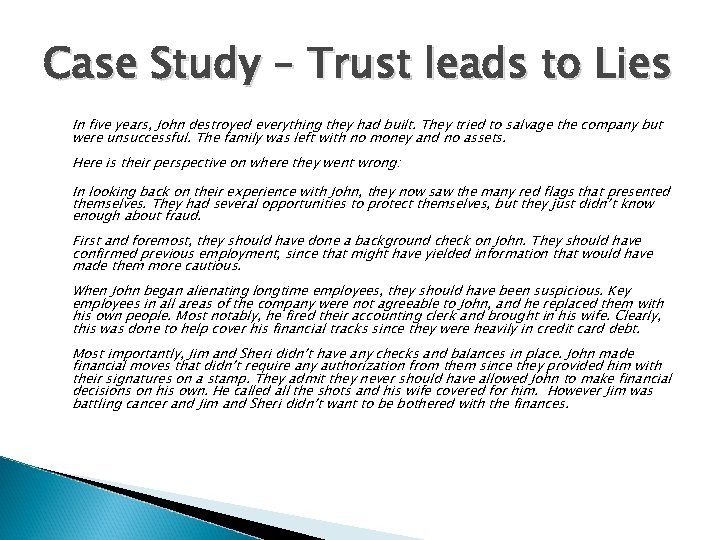 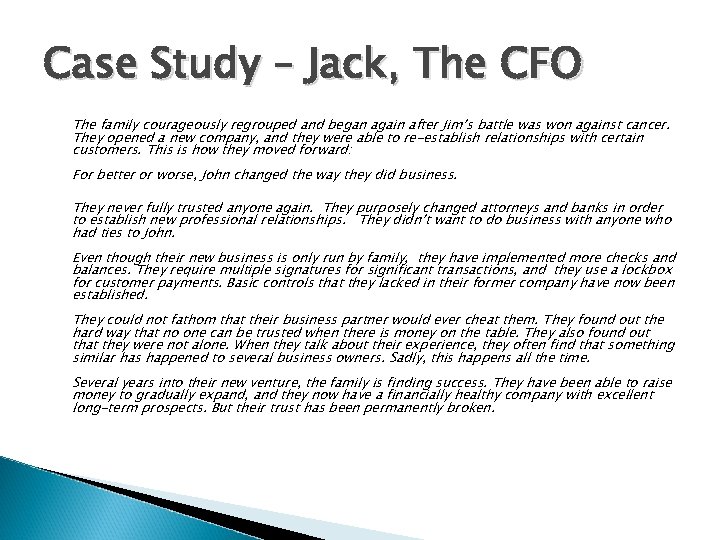 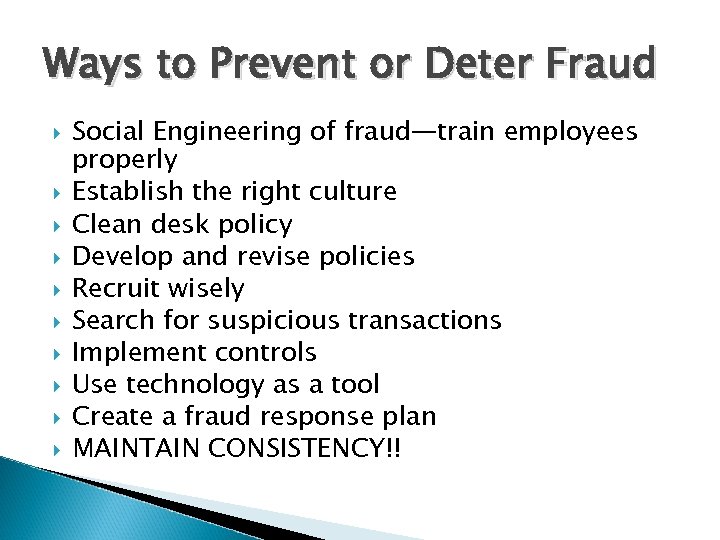 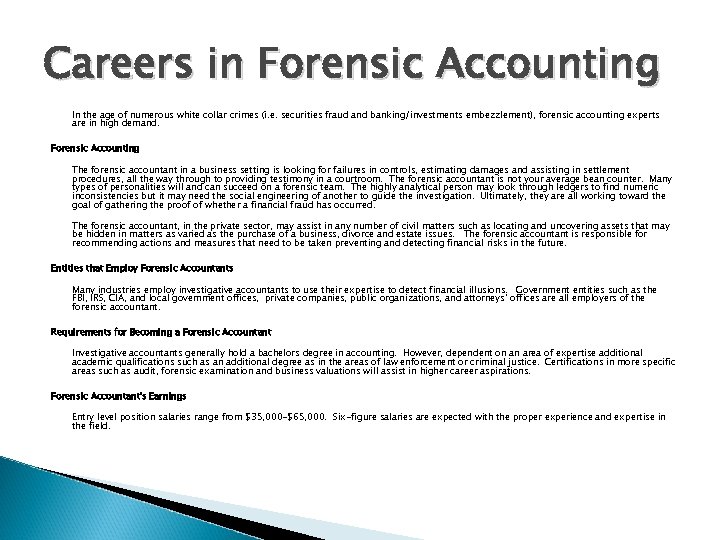 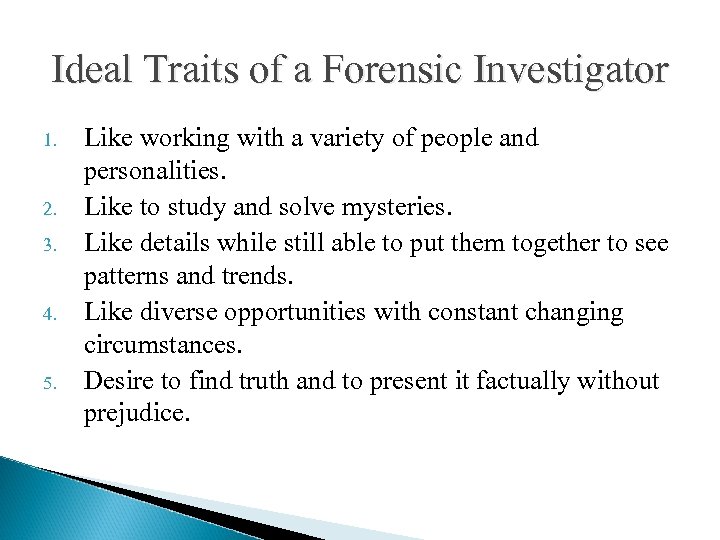 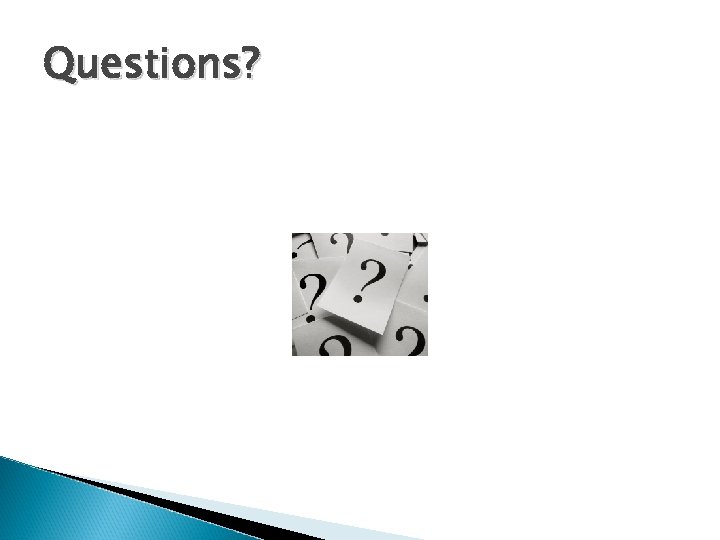 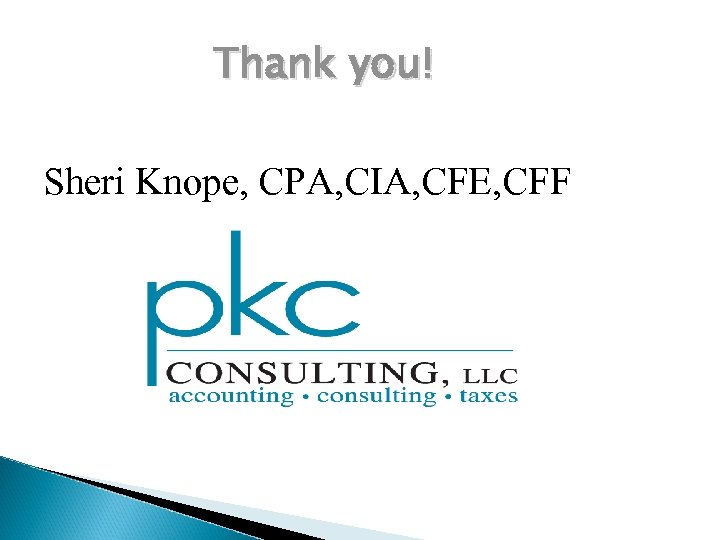 Скачать презентацию A Case of Fraud to use to Teach

A Case of Fraud to Teach to Kids

Case Study – Trust leads to Loss The following case study is based on a true story. A husband wife team, James and Sheri poured years of their lives into a small business. All they had invested in their business was stolen by an employee who had been trusted to take care of the business while the husband battled with cancer. Fifteen years of their sweat and long hours. Fifteen years of hard work all wiped away by John taking advantage of his position and an opportunity in order to take all of James and Sheri’s money and trust. John altered the way they would forever view the world. They have never looked at people in the same way. Ten years into their business venture, they brought in John as their cashier. They needed someone with the financial expertise they didn’t posses. They trusted John to protect their money. The company started to expand, and James and Sheri did whatever was needed to finance it. They refinanced their house and liquidated retirement accounts But no matter how much money they put into the company, there was never enough cash flow. Sales were higher than ever, yet they never had even a few dollars to spare. Each time they questioned John about the fact that they never seemed to get ahead despite their booming sales. John calmed their fears.

Case Study – Trust leads to Lies The truth was that John was funneling money out of the company. He saw to it that suppliers were not paid and that James and Sheri’s bank debt grew. John’s ultimate fantasy was a takeover of their business with the money he stole from them. John convinced creditors he had the right to make lending decisions for Jim and Sheri’s business by telling them that they were absentee owners who had no business sense. John would be the good guy who would come to the rescue and buy out the company. At the very last moment, right before Jack was going to execute the takeover, Jim and Sheri sensed something was terribly wrong and they locked him out of the company. Attorneys and accountants came in immediately to analyze their situation. It quickly became clear that John had perpetrated a massive fraud against the company, leaving Jim and Sheri with no cash, few hard assets, and huge debts. It was also clear that, based upon their sales and collection history, they should have had plenty of money. That conclusion was validated when they began seeing positive cash flow within 45 days after John’s dismissal. James and Sheri received some relief from their creditors to attempt to salvage the business. They did well for a few months, but John had put them so far into debt (in order to fill his own pockets) that they were always one step away from failure. And then it happened. they lost one key customer and their business folded. Everything they had worked for over fifteen years was gone. They lost their good names and their good credit.

Case Study – Trust leads to Lies In five years, John destroyed everything they had built. They tried to salvage the company but were unsuccessful. The family was left with no money and no assets. Here is their perspective on where they went wrong: In looking back on their experience with John, they now saw the many red flags that presented themselves. They had several opportunities to protect themselves, but they just didn’t know enough about fraud. First and foremost, they should have done a background check on John. They should have confirmed previous employment, since that might have yielded information that would have made them more cautious. When John began alienating longtime employees, they should have been suspicious. Key employees in all areas of the company were not agreeable to John, and he replaced them with his own people. Most notably, he fired their accounting clerk and brought in his wife. Clearly, this was done to help cover his financial tracks since they were heavily in credit card debt. Most importantly, Jim and Sheri didn’t have any checks and balances in place. John made financial moves that didn’t require any authorization from them since they provided him with their signatures on a stamp. They admit they never should have allowed John to make financial decisions on his own. He called all the shots and his wife covered for him. However Jim was battling cancer and Jim and Sheri didn’t want to be bothered with the finances.

Case Study – Jack, The CFO The family courageously regrouped and began again after Jim’s battle was won against cancer. They opened a new company, and they were able to re-establish relationships with certain customers. This is how they moved forward: For better or worse, John changed the way they did business. They never fully trusted anyone again. They purposely changed attorneys and banks in order to establish new professional relationships. They didn’t want to do business with anyone who had ties to John. Even though their new business is only run by family, they have implemented more checks and balances. They require multiple signatures for significant transactions, and they use a lockbox for customer payments. Basic controls that they lacked in their former company have now been established. They could not fathom that their business partner would ever cheat them. They found out the hard way that no one can be trusted when there is money on the table. They also found out that they were not alone. When they talk about their experience, they often find that something similar has happened to several business owners. Sadly, this happens all the time. Several years into their new venture, the family is finding success. They have been able to raise money to gradually expand, and they now have a financially healthy company with excellent long-term prospects. But their trust has been permanently broken.

Careers in Forensic Accounting In the age of numerous white collar crimes (i. e. securities fraud and banking/investments embezzlement), forensic accounting experts are in high demand. Forensic Accounting The forensic accountant in a business setting is looking for failures in controls, estimating damages and assisting in settlement procedures, all the way through to providing testimony in a courtroom. The forensic accountant is not your average bean counter. Many types of personalities will and can succeed on a forensic team. The highly analytical person may look through ledgers to find numeric inconsistencies but it may need the social engineering of another to guide the investigation. Ultimately, they are all working toward the goal of gathering the proof of whether a financial fraud has occurred. The forensic accountant, in the private sector, may assist in any number of civil matters such as locating and uncovering assets that may be hidden in matters as varied as the purchase of a business, divorce and estate issues. The forensic accountant is responsible for recommending actions and measures that need to be taken preventing and detecting financial risks in the future. Entities that Employ Forensic Accountants Many industries employ investigative accountants to use their expertise to detect financial illusions. Government entities such as the FBI, IRS, CIA, and local government offices, private companies, public organizations, and attorneys’ offices are all employers of the forensic accountant. Requirements for Becoming a Forensic Accountant Investigative accountants generally hold a bachelors degree in accounting. However, dependent on an area of expertise additional academic qualifications such as an additional degree as in the areas of law enforcement or criminal justice. Certifications in more specific areas such as audit, forensic examination and business valuations will assist in higher career aspirations. Forensic Accountant's Earnings Entry level position salaries range from $35, 000 -$65, 000. Six-figure salaries are expected with the proper experience and expertise in the field.

Ideal Traits of a Forensic Investigator 1. 2. 3. 4. 5. Like working with a variety of people and personalities. Like to study and solve mysteries. Like details while still able to put them together to see patterns and trends. Like diverse opportunities with constant changing circumstances. Desire to find truth and to present it factually without prejudice.