A BRIEF HISTORY OF LONDON 2008 by Mag 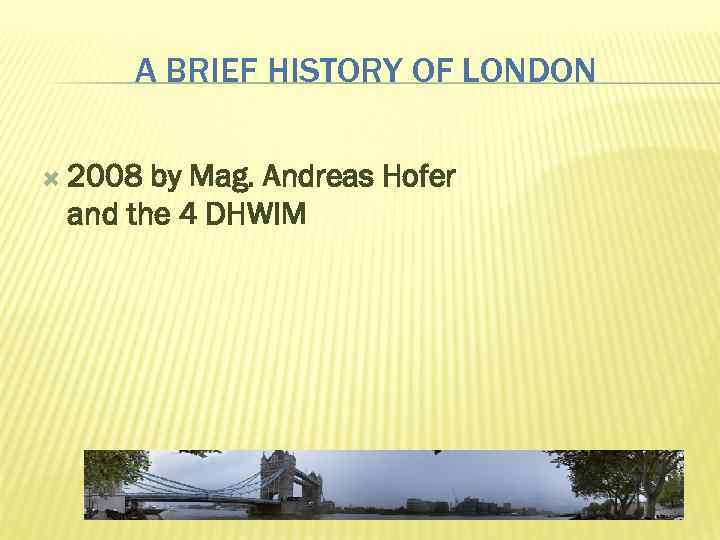 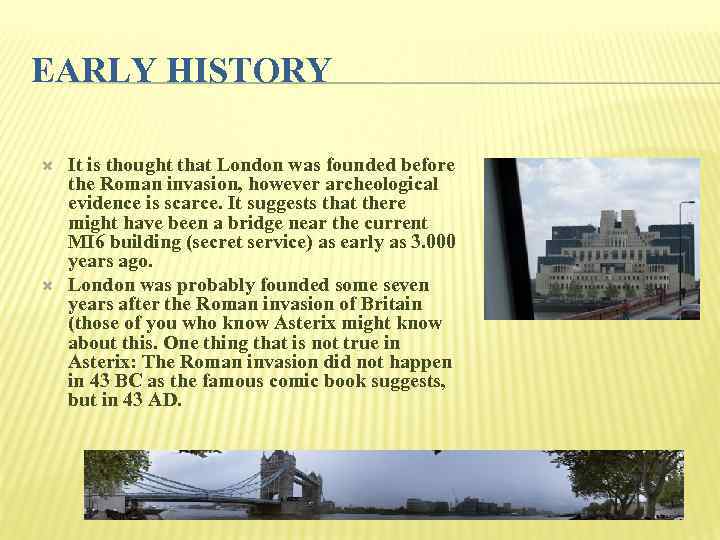 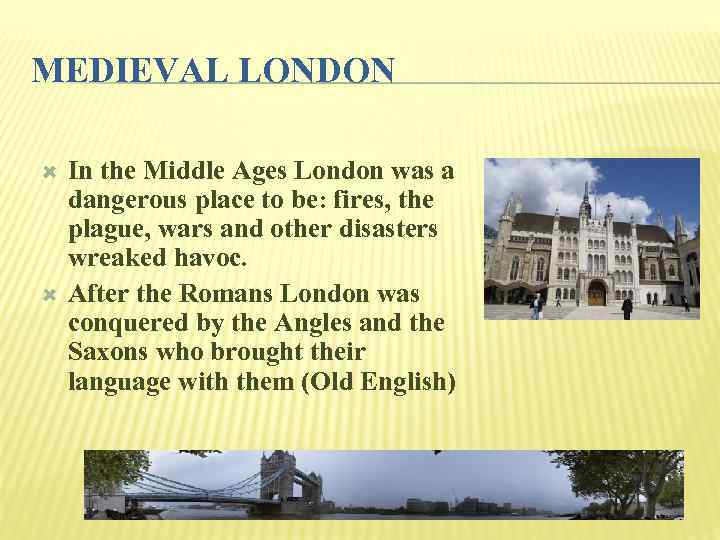 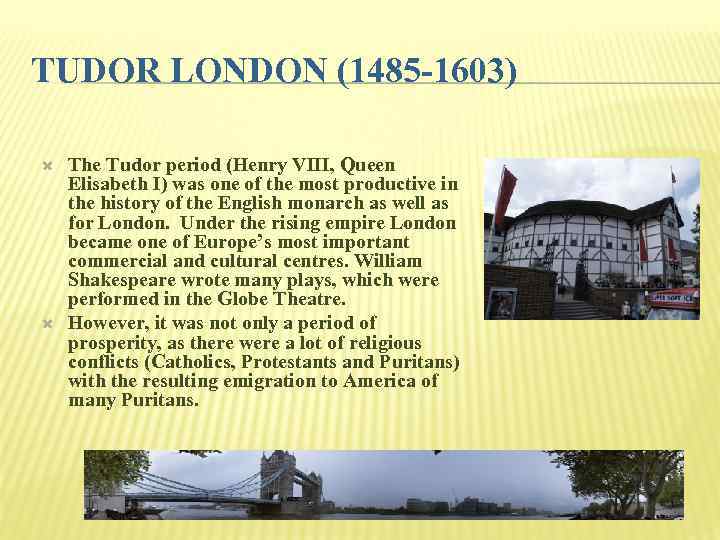 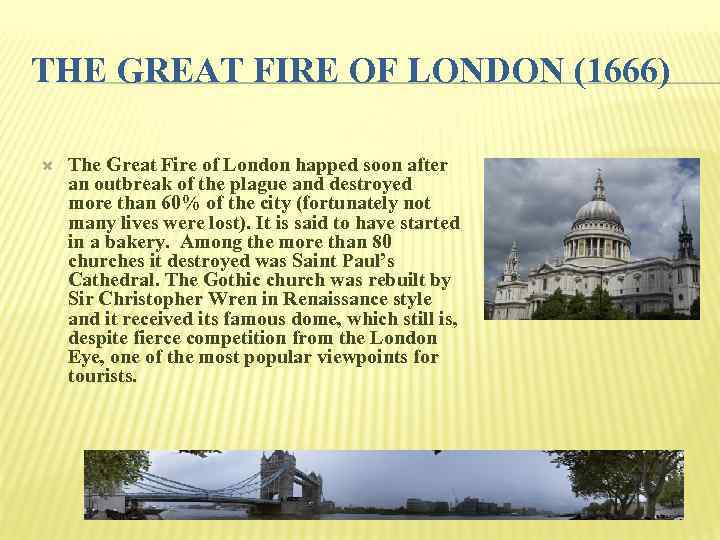 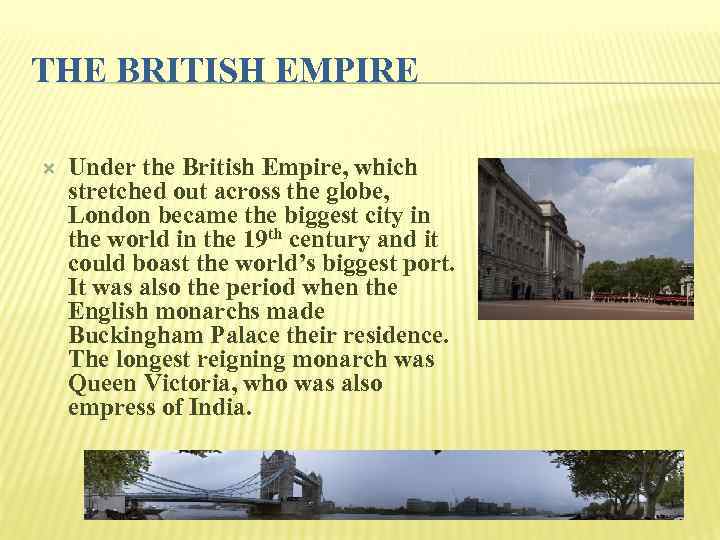 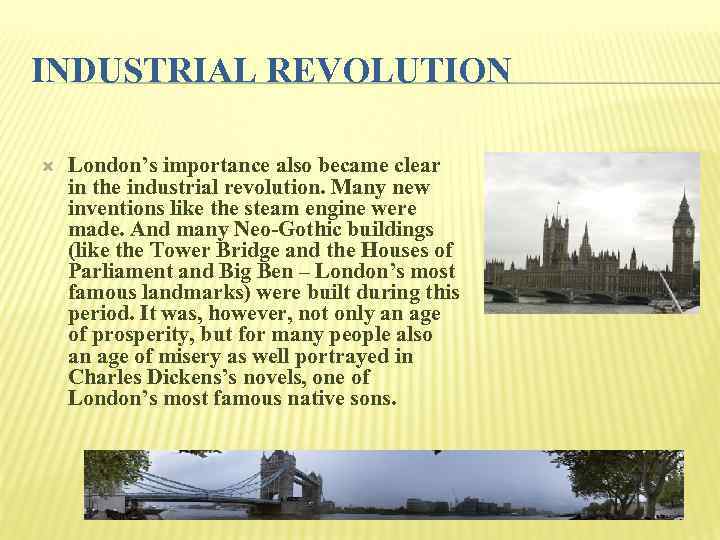 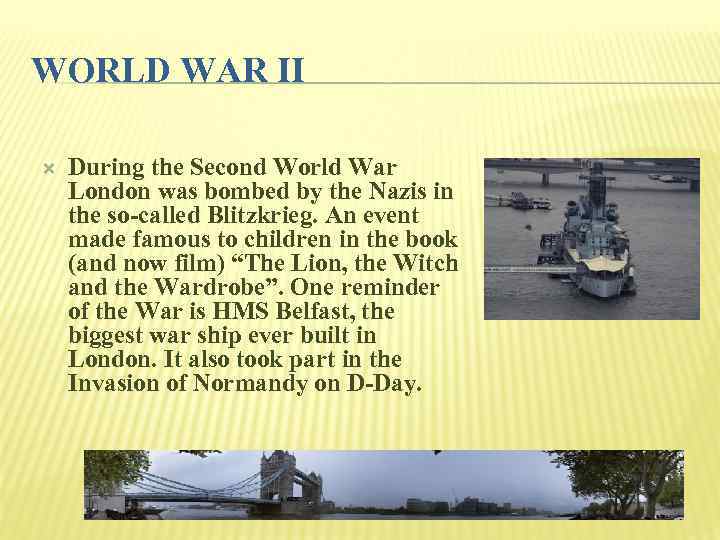 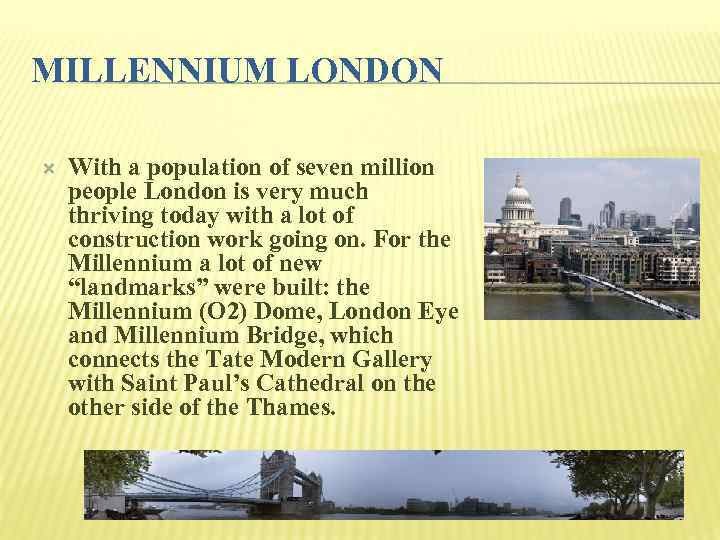 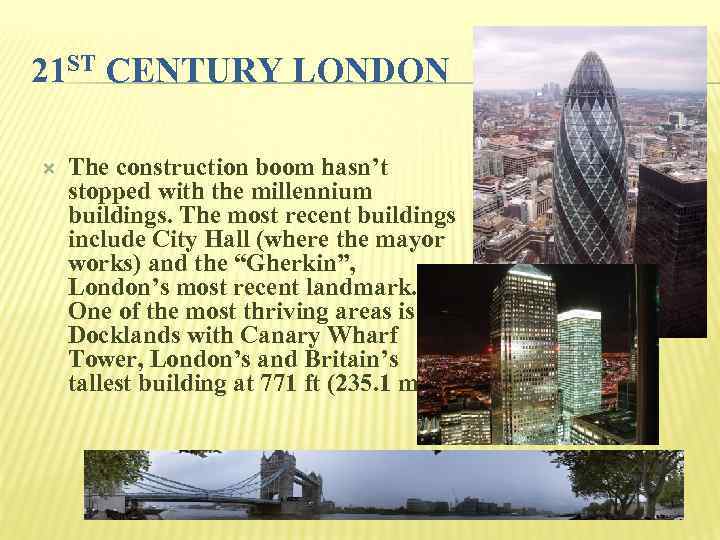 Скачать презентацию A BRIEF HISTORY OF LONDON 2008 by Mag

A BRIEF HISTORY OF LONDON 2008 by Mag. Andreas Hofer and the 4 DHWIM

EARLY HISTORY It is thought that London was founded before the Roman invasion, however archeological evidence is scarce. It suggests that there might have been a bridge near the current MI 6 building (secret service) as early as 3. 000 years ago. London was probably founded some seven years after the Roman invasion of Britain (those of you who know Asterix might know about this. One thing that is not true in Asterix: The Roman invasion did not happen in 43 BC as the famous comic book suggests, but in 43 AD.

MEDIEVAL LONDON In the Middle Ages London was a dangerous place to be: fires, the plague, wars and other disasters wreaked havoc. After the Romans London was conquered by the Angles and the Saxons who brought their language with them (Old English)

THE NORMAN CONQUEST: In 1066 William the Conqueror conquered London with his Norman (though French speaking) army. Not only was William a destroyer but he was also a builder. Among his many palaces one still is one of London’s most famous landmarks: the Tower of London.

TUDOR LONDON (1485 -1603) The Tudor period (Henry VIII, Queen Elisabeth I) was one of the most productive in the history of the English monarch as well as for London. Under the rising empire London became one of Europe’s most important commercial and cultural centres. William Shakespeare wrote many plays, which were performed in the Globe Theatre. However, it was not only a period of prosperity, as there were a lot of religious conflicts (Catholics, Protestants and Puritans) with the resulting emigration to America of many Puritans.

THE GREAT FIRE OF LONDON (1666) The Great Fire of London happed soon after an outbreak of the plague and destroyed more than 60% of the city (fortunately not many lives were lost). It is said to have started in a bakery. Among the more than 80 churches it destroyed was Saint Paul’s Cathedral. The Gothic church was rebuilt by Sir Christopher Wren in Renaissance style and it received its famous dome, which still is, despite fierce competition from the London Eye, one of the most popular viewpoints for tourists.

THE BRITISH EMPIRE Under the British Empire, which stretched out across the globe, London became the biggest city in the world in the 19 th century and it could boast the world’s biggest port. It was also the period when the English monarchs made Buckingham Palace their residence. The longest reigning monarch was Queen Victoria, who was also empress of India.

INDUSTRIAL REVOLUTION London’s importance also became clear in the industrial revolution. Many new inventions like the steam engine were made. And many Neo-Gothic buildings (like the Tower Bridge and the Houses of Parliament and Big Ben – London’s most famous landmarks) were built during this period. It was, however, not only an age of prosperity, but for many people also an age of misery as well portrayed in Charles Dickens’s novels, one of London’s most famous native sons.

WORLD WAR II During the Second World War London was bombed by the Nazis in the so-called Blitzkrieg. An event made famous to children in the book (and now film) “The Lion, the Witch and the Wardrobe”. One reminder of the War is HMS Belfast, the biggest war ship ever built in London. It also took part in the Invasion of Normandy on D-Day.

MILLENNIUM LONDON With a population of seven million people London is very much thriving today with a lot of construction work going on. For the Millennium a lot of new “landmarks” were built: the Millennium (O 2) Dome, London Eye and Millennium Bridge, which connects the Tate Modern Gallery with Saint Paul’s Cathedral on the other side of the Thames.

21 ST CENTURY LONDON The construction boom hasn’t stopped with the millennium buildings. The most recent buildings include City Hall (where the mayor works) and the “Gherkin”, London’s most recent landmark. One of the most thriving areas is the Docklands with Canary Wharf Tower, London’s and Britain’s tallest building at 771 ft (235. 1 m).

THE END We hope you‘ve enjoyed our through the history of London. You might want to do the London Quiz now to check how much you remember.