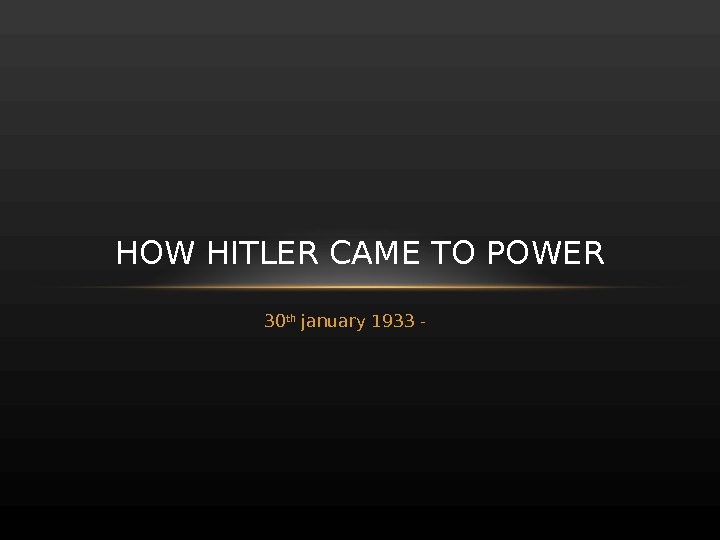 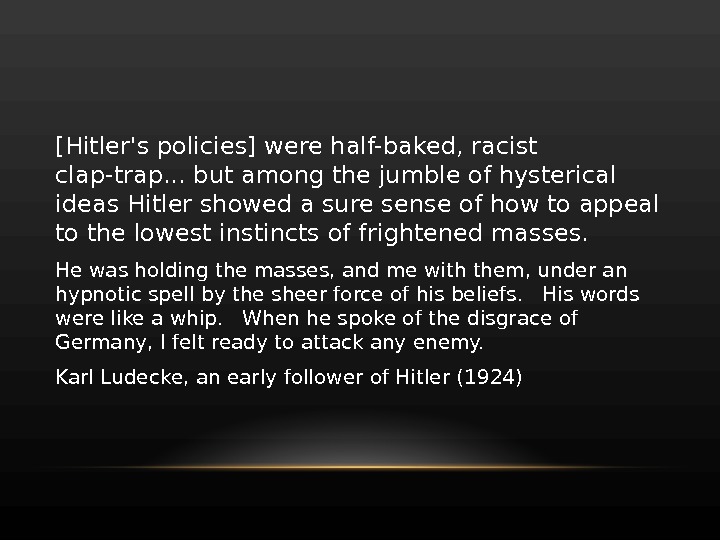 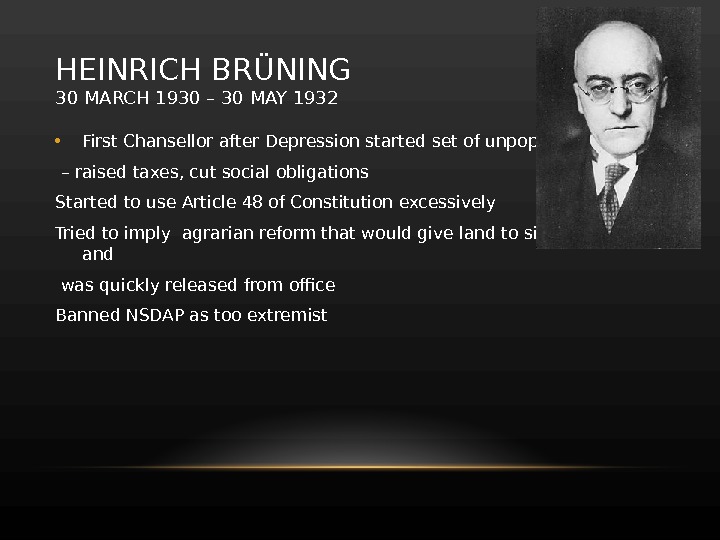 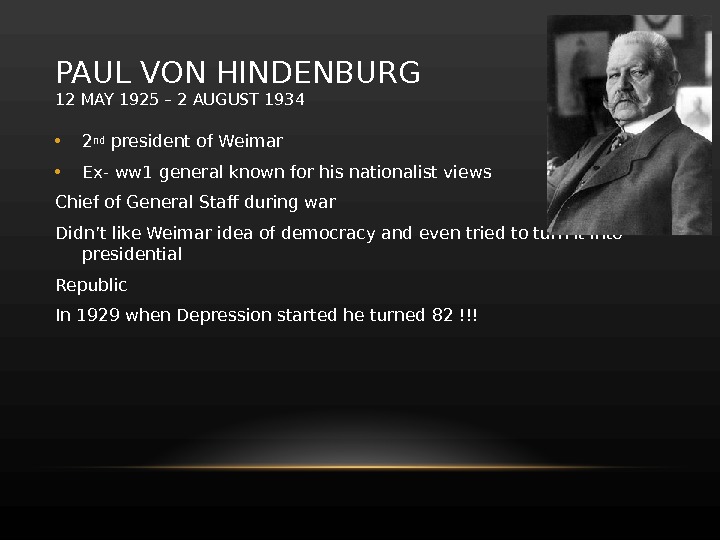 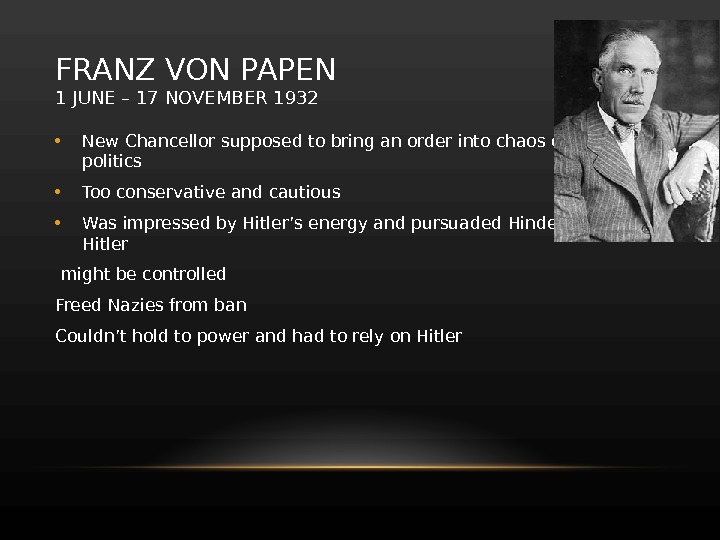 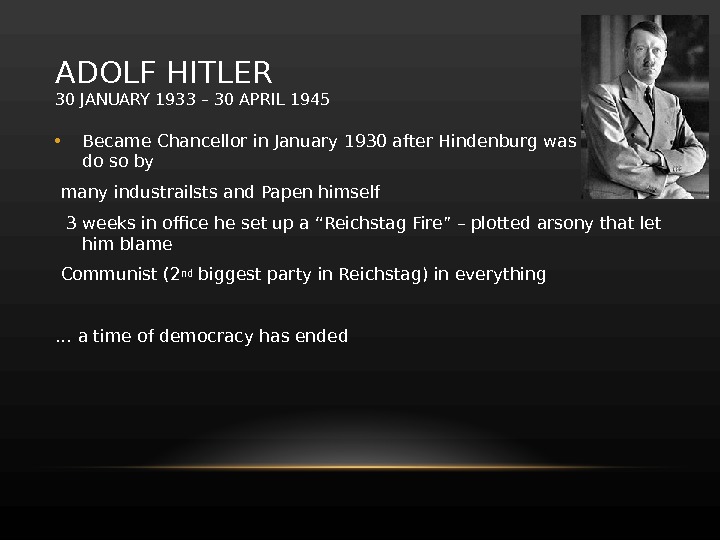 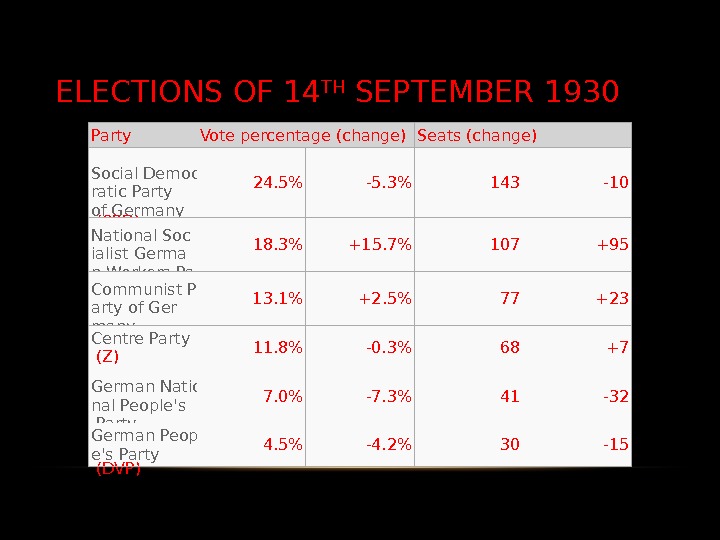 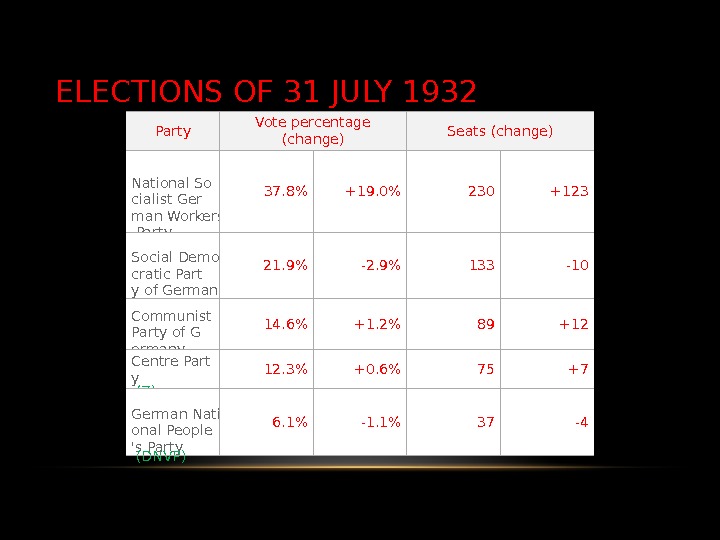 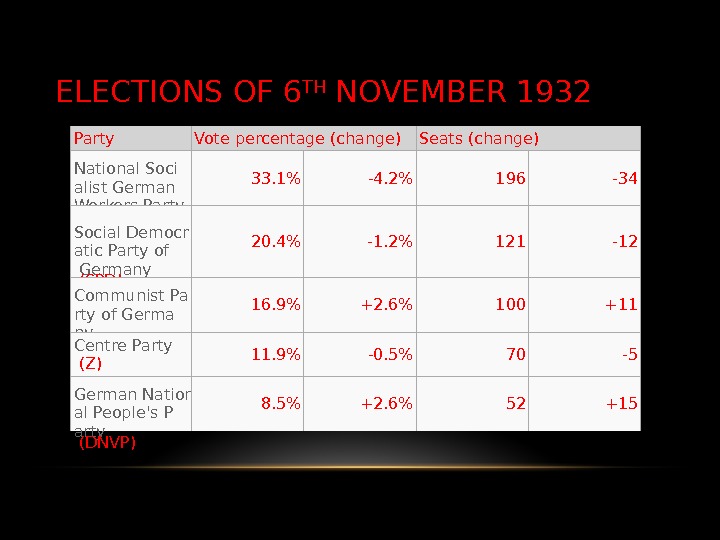 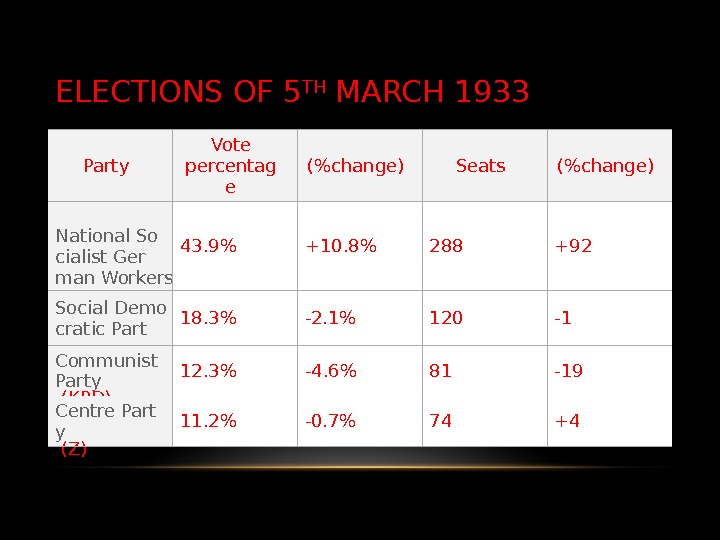 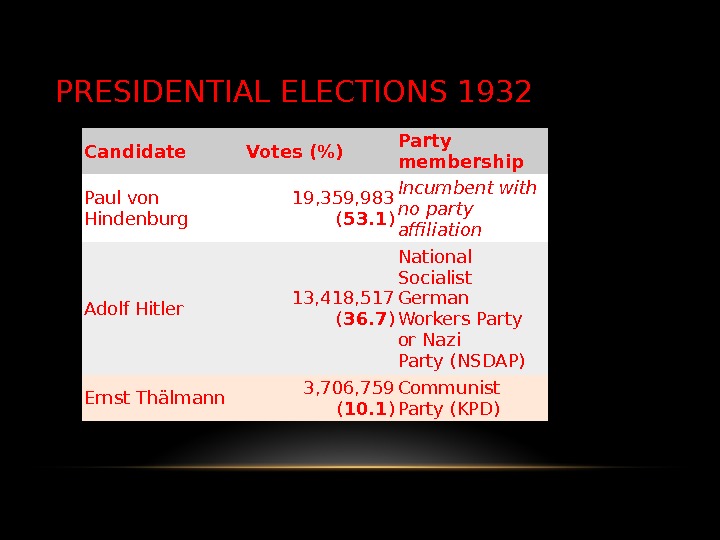 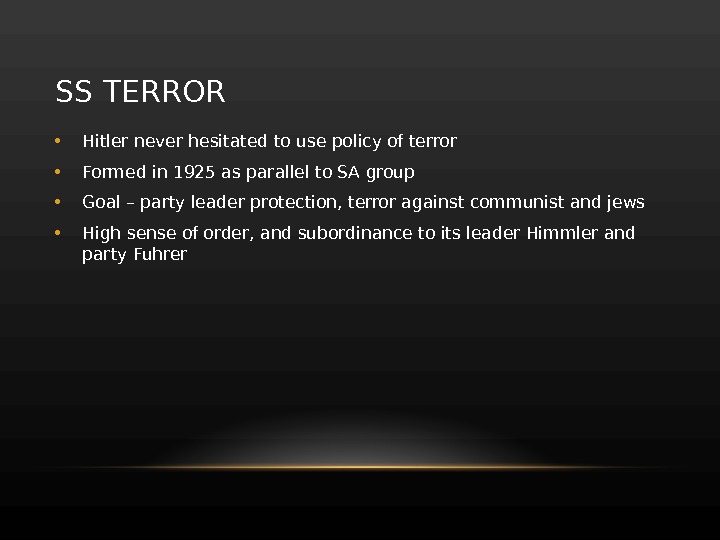 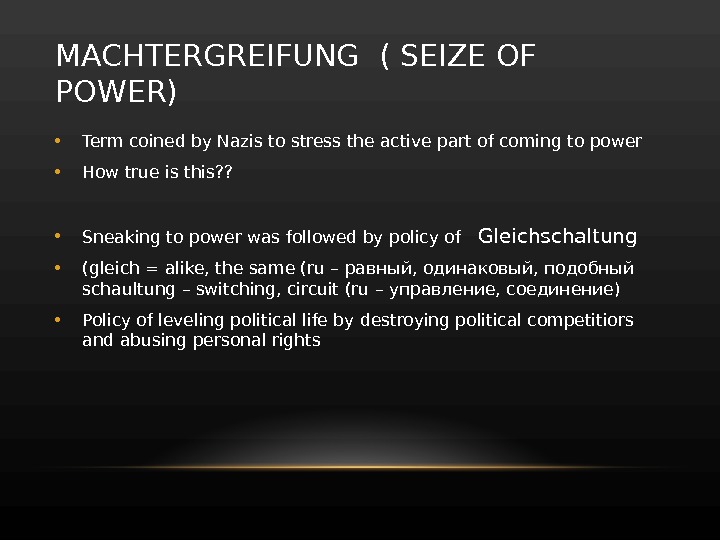 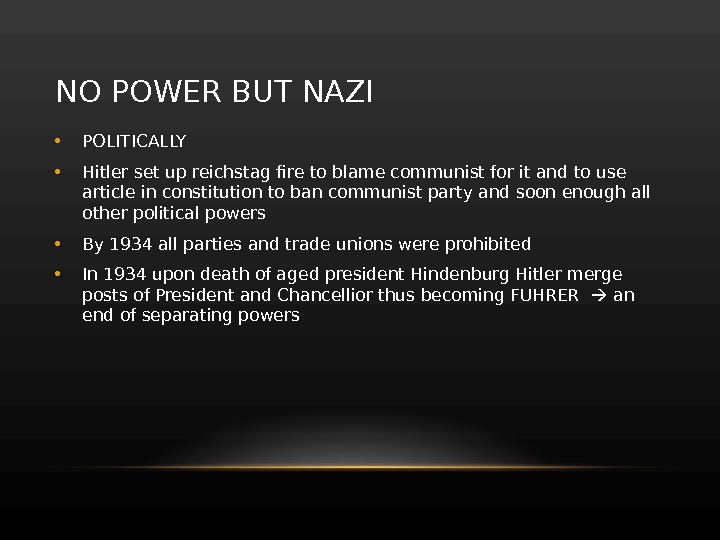 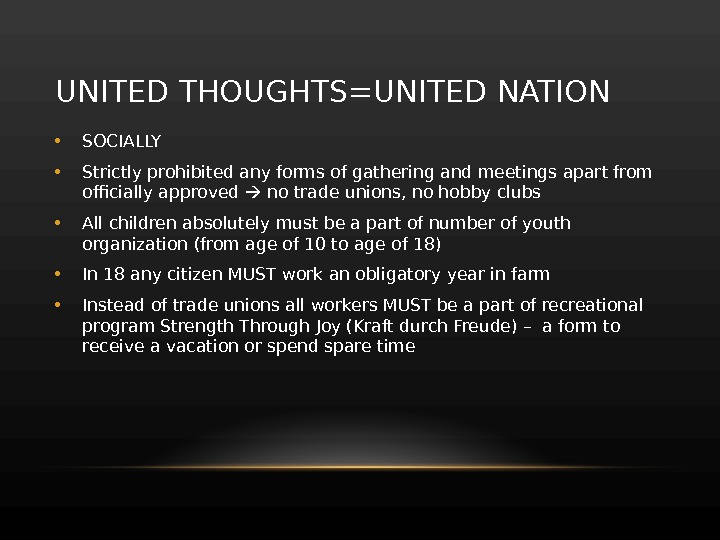 [ Hitler’s policies] were half-baked, racist clap-trap. . . but among the jumble of hysterical ideas Hitler showed a sure sense of how to appeal to the lowest instincts of frightened masses. He was holding the masses, and me with them, under an hypnotic spell by the sheer force of his beliefs. His words were like a whip. When he spoke of the disgrace of Germany, I felt ready to attack any enemy. Karl Ludecke, an early follower of Hitler (1924)

HEINRICH BRÜNING 30 MARCH 1930– 30 MAY 1932 • First Chansellor after Depression started set of unpopular reforms – raised taxes, cut social obligations Started to use Article 48 of Constitution excessively Tried to imply agrarian reform that would give land to simple Germans and was quickly released from office Banned NSDAP as too extremist

PAUL VON HINDENBURG 12 MAY 1925– 2 AUGUST 1934 • 2 nd president of Weimar • Ex- ww 1 general known for his nationalist views Chief of General Staff during war Didn’t like Weimar idea of democracy and even tried to turn it into presidential Republic In 1929 when Depression started he turned 82 !!!

SS TERROR • Hitler never hesitated to use policy of terror • Formed in 1925 as parallel to SA group • Goal – party leader protection, terror against communist and jews • High sense of order, and subordinance to its leader Himmler and party Fuhrer

UNITED THOUGHTS=UNITED NATION • SOCIALLY • Strictly prohibited any forms of gathering and meetings apart from officially approved no trade unions, no hobby clubs • All children absolutely must be a part of number of youth organization (from age of 10 to age of 18) • In 18 any citizen MUST work an obligatory year in farm • Instead of trade unions all workers MUST be a part of recreational program Strength Through Joy (Kraft durch Freude) – a form to receive a vacation or spend spare time