3 Definition and theories on bilingualism Madrid and 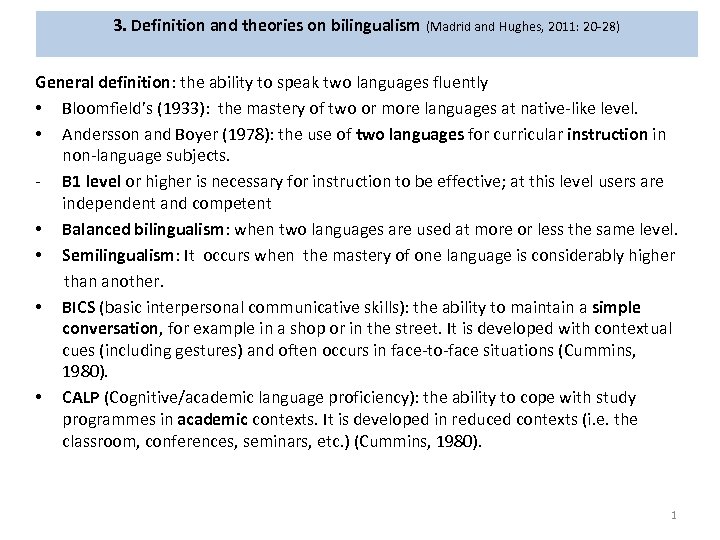 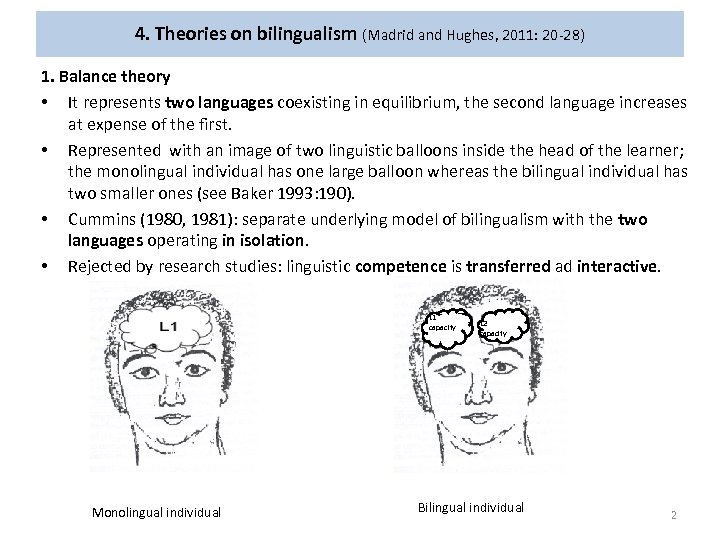 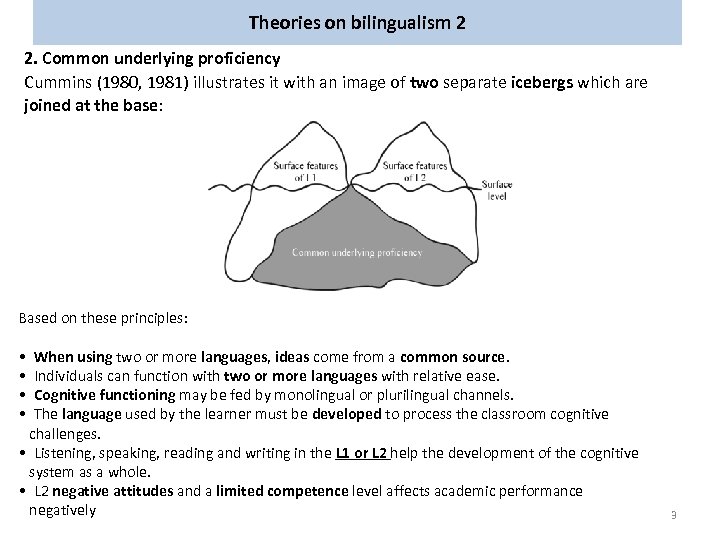 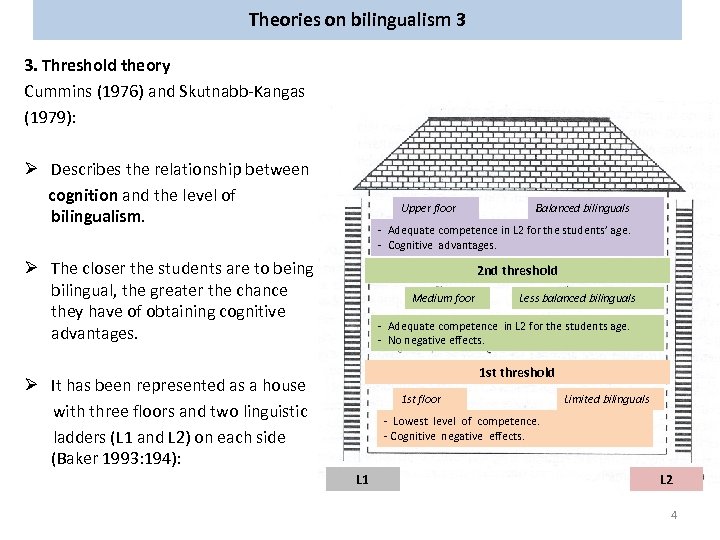 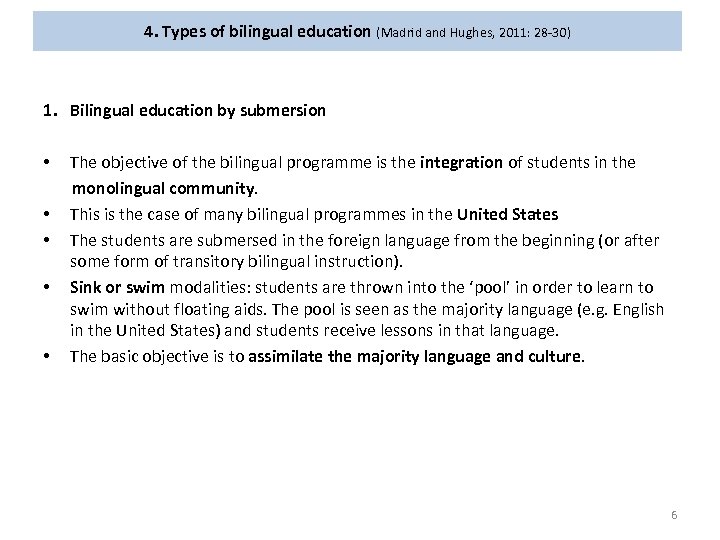 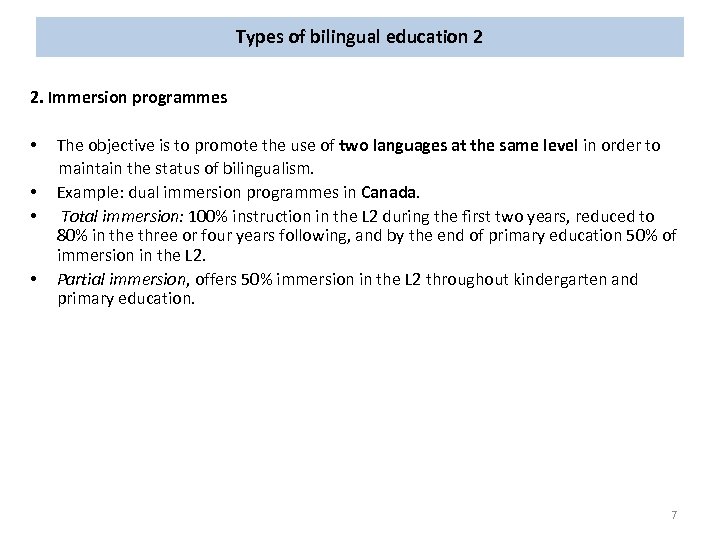 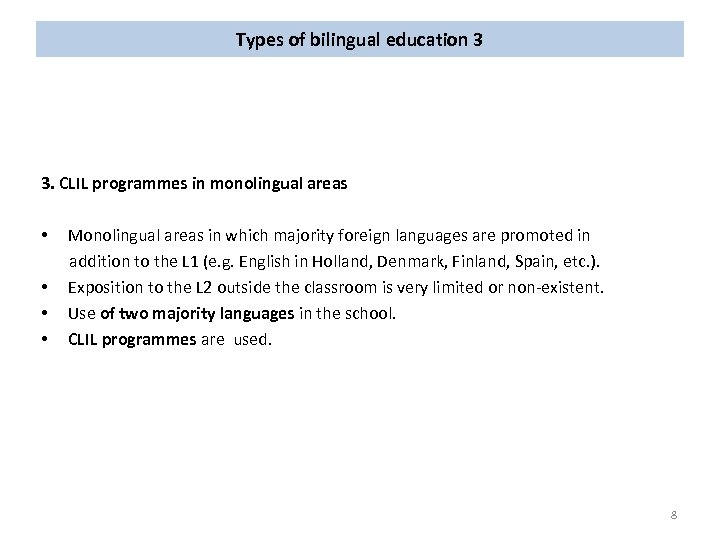 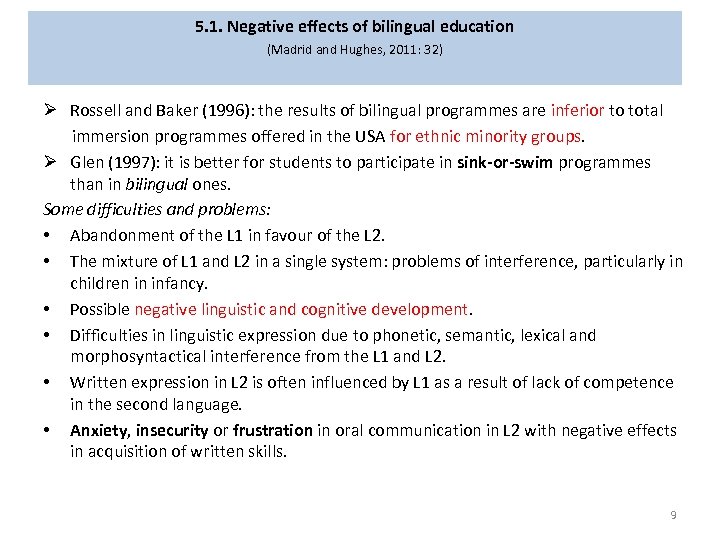 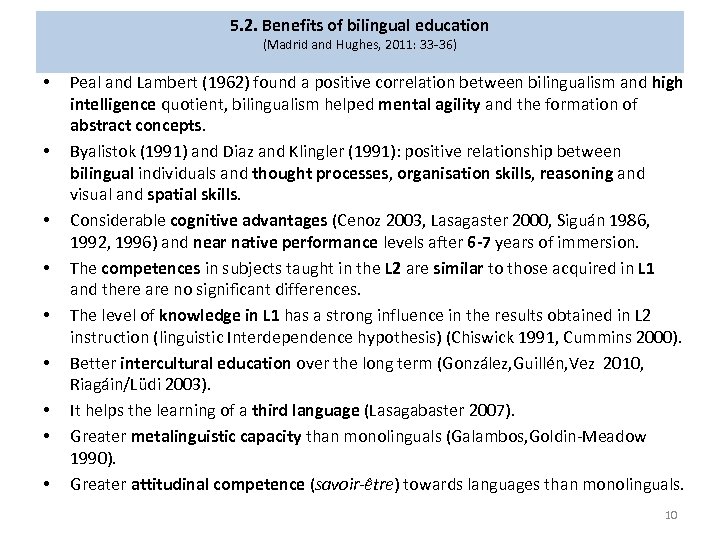 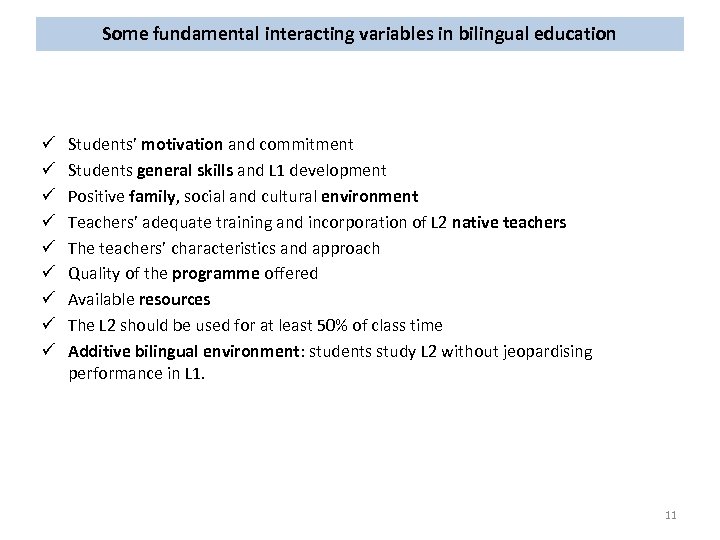 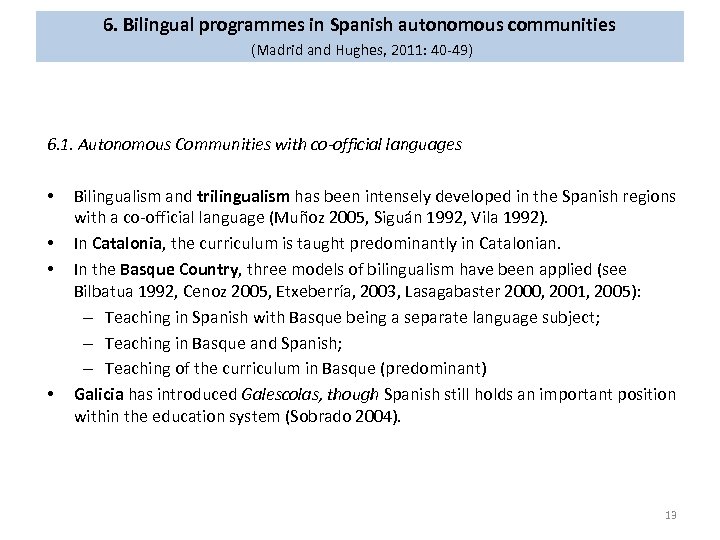 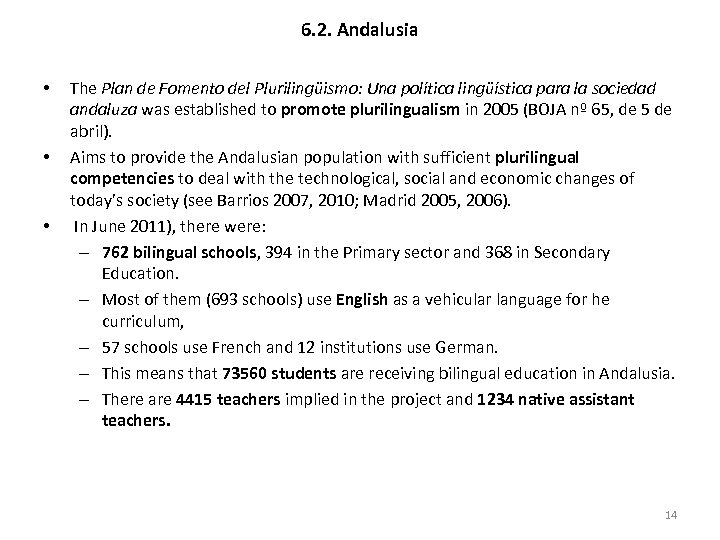 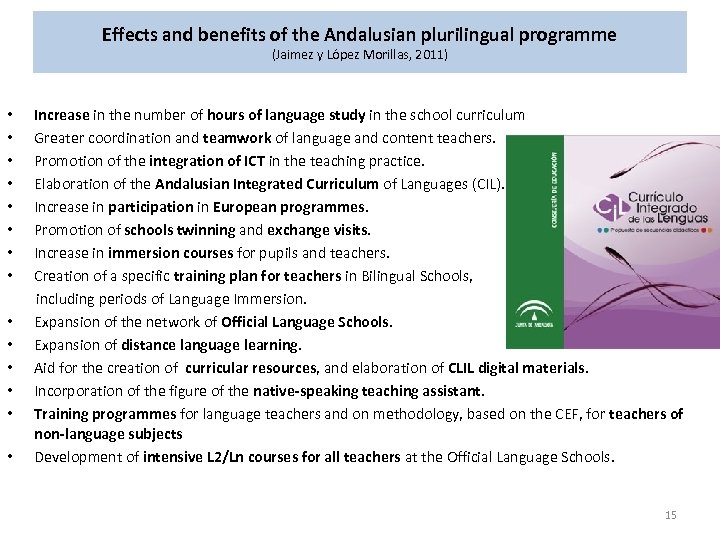 Скачать презентацию 3 Definition and theories on bilingualism Madrid and

3. Definition and theories on bilingualism (Madrid and Hughes, 2011: 20 -28) General definition: the ability to speak two languages fluently • Bloomfield’s (1933): the mastery of two or more languages at native-like level. • Andersson and Boyer (1978): the use of two languages for curricular instruction in non-language subjects. - B 1 level or higher is necessary for instruction to be effective; at this level users are independent and competent • Balanced bilingualism: when two languages are used at more or less the same level. • Semilingualism: It occurs when the mastery of one language is considerably higher than another. • BICS (basic interpersonal communicative skills): the ability to maintain a simple conversation, for example in a shop or in the street. It is developed with contextual cues (including gestures) and often occurs in face-to-face situations (Cummins, 1980). • CALP (Cognitive/academic language proficiency): the ability to cope with study programmes in academic contexts. It is developed in reduced contexts (i. e. the classroom, conferences, seminars, etc. ) (Cummins, 1980). 1

Theories on bilingualism 2 2. Common underlying proficiency Cummins (1980, 1981) illustrates it with an image of two separate icebergs which are joined at the base: Based on these principles: • When using two or more languages, ideas come from a common source. • Individuals can function with two or more languages with relative ease. • Cognitive functioning may be fed by monolingual or plurilingual channels. • The language used by the learner must be developed to process the classroom cognitive challenges. • Listening, speaking, reading and writing in the L 1 or L 2 help the development of the cognitive system as a whole. • L 2 negative attitudes and a limited competence level affects academic performance negatively 3

Theories on bilingualism 4 Linguistic interdependence hypothesis - Based on the relationship between the development of L 1 and L 2. Proposed by Vygotsky (1934, 1986) and Cummins (1978). Competence in L 2 depends in part on the level of competence already acquired in L 1. The higher the level of development in L 1 the easier it will be to develop the L 2. 5

4. Types of bilingual education (Madrid and Hughes, 2011: 28 -30) 1. Bilingual education by submersion • The objective of the bilingual programme is the integration of students in the monolingual community. • This is the case of many bilingual programmes in the United States • The students are submersed in the foreign language from the beginning (or after some form of transitory bilingual instruction). • Sink or swim modalities: students are thrown into the ‘pool’ in order to learn to swim without floating aids. The pool is seen as the majority language (e. g. English in the United States) and students receive lessons in that language. • The basic objective is to assimilate the majority language and culture. 6

Types of bilingual education 3 3. CLIL programmes in monolingual areas • Monolingual areas in which majority foreign languages are promoted in addition to the L 1 (e. g. English in Holland, Denmark, Finland, Spain, etc. ). • Exposition to the L 2 outside the classroom is very limited or non-existent. • Use of two majority languages in the school. • CLIL programmes are used. 8

5. 1. Negative effects of bilingual education (Madrid and Hughes, 2011: 32) Ø Rossell and Baker (1996): the results of bilingual programmes are inferior to total immersion programmes offered in the USA for ethnic minority groups. Ø Glen (1997): it is better for students to participate in sink-or-swim programmes than in bilingual ones. Some difficulties and problems: • Abandonment of the L 1 in favour of the L 2. • The mixture of L 1 and L 2 in a single system: problems of interference, particularly in children in infancy. • Possible negative linguistic and cognitive development. • Difficulties in linguistic expression due to phonetic, semantic, lexical and morphosyntactical interference from the L 1 and L 2. • Written expression in L 2 is often influenced by L 1 as a result of lack of competence in the second language. • Anxiety, insecurity or frustration in oral communication in L 2 with negative effects in acquisition of written skills. 9

5. 2. Benefits of bilingual education (Madrid and Hughes, 2011: 33 -36) • • • Peal and Lambert (1962) found a positive correlation between bilingualism and high intelligence quotient, bilingualism helped mental agility and the formation of abstract concepts. Byalistok (1991) and Diaz and Klingler (1991): positive relationship between bilingual individuals and thought processes, organisation skills, reasoning and visual and spatial skills. Considerable cognitive advantages (Cenoz 2003, Lasagaster 2000, Siguán 1986, 1992, 1996) and near native performance levels after 6 -7 years of immersion. The competences in subjects taught in the L 2 are similar to those acquired in L 1 and there are no significant differences. The level of knowledge in L 1 has a strong influence in the results obtained in L 2 instruction (linguistic Interdependence hypothesis) (Chiswick 1991, Cummins 2000). Better intercultural education over the long term (González, Guillén, Vez 2010, Riagáin/Lüdi 2003). It helps the learning of a third language (Lasagabaster 2007). Greater metalinguistic capacity than monolinguals (Galambos, Goldin-Meadow 1990). Greater attitudinal competence (savoir-être) towards languages than monolinguals. 10

Effective classroom techniques in bilingual education (Snow 1990, Madrid y Hughes 2011, Madrid y Madrid 2013) • • • Integrated curricular design Maximum use of the L 2/Ln and minimum use (or no use) of the L 1 Helping the students construct their knowledge establishing connections between the new and the learnt knowledge to favour its integration in the students’ cognitive network Provision of rich contextual support (e. g. through paralanguage, etc. ). Reiteration of instructions and organisational guidelines. Repetition of what is said and done in class. Use of graphs, conceptual maps, synthesis and summaries. The ample use of visual materials, realia, and resources which allow the senses to engage in learning. Intensive group and cooperative work. The teacher becomes the linguistic model, so a careful pronunciation and clear oral expression are vital. Variety of methods and learning tasks. The need for high levels of comprehensible input (Krashen 1985). Adequate error treatment 12

6. Bilingual programmes in Spanish autonomous communities (Madrid and Hughes, 2011: 40 -49) 6. 1. Autonomous Communities with co-official languages • Bilingualism and trilingualism has been intensely developed in the Spanish regions with a co-official language (Muñoz 2005, Siguán 1992, Vila 1992). • In Catalonia, the curriculum is taught predominantly in Catalonian. • In the Basque Country, three models of bilingualism have been applied (see Bilbatua 1992, Cenoz 2005, Etxeberría, 2003, Lasagabaster 2000, 2001, 2005): – Teaching in Spanish with Basque being a separate language subject; – Teaching in Basque and Spanish; – Teaching of the curriculum in Basque (predominant) • Galicia has introduced Galescolas, though Spanish still holds an important position within the education system (Sobrado 2004). 13

6. 2. Andalusia • • • The Plan de Fomento del Plurilingüismo: Una política lingüística para la sociedad andaluza was established to promote plurilingualism in 2005 (BOJA nº 65, de 5 de abril). Aims to provide the Andalusian population with sufficient plurilingual competencies to deal with the technological, social and economic changes of today’s society (see Barrios 2007, 2010; Madrid 2005, 2006). In June 2011), there were: – 762 bilingual schools, 394 in the Primary sector and 368 in Secondary Education. – Most of them (693 schools) use English as a vehicular language for he curriculum, – 57 schools use French and 12 institutions use German. – This means that 73560 students are receiving bilingual education in Andalusia. – There are 4415 teachers implied in the project and 1234 native assistant teachers. 14

Effects and benefits of the Andalusian plurilingual programme (Jaimez y López Morillas, 2011) • Increase in the number of hours of language study in the school curriculum • Greater coordination and teamwork of language and content teachers. • Promotion of the integration of ICT in the teaching practice. • Elaboration of the Andalusian Integrated Curriculum of Languages (CIL). • Increase in participation in European programmes. • Promotion of schools twinning and exchange visits. • Increase in immersion courses for pupils and teachers. • Creation of a specific training plan for teachers in Bilingual Schools, including periods of Language Immersion. • Expansion of the network of Official Language Schools. • Expansion of distance language learning. • Aid for the creation of curricular resources, and elaboration of CLIL digital materials. • Incorporation of the figure of the native-speaking teaching assistant. • Training programmes for language teachers and on methodology, based on the CEF, for teachers of non-language subjects • Development of intensive L 2/Ln courses for all teachers at the Official Language Schools. 15