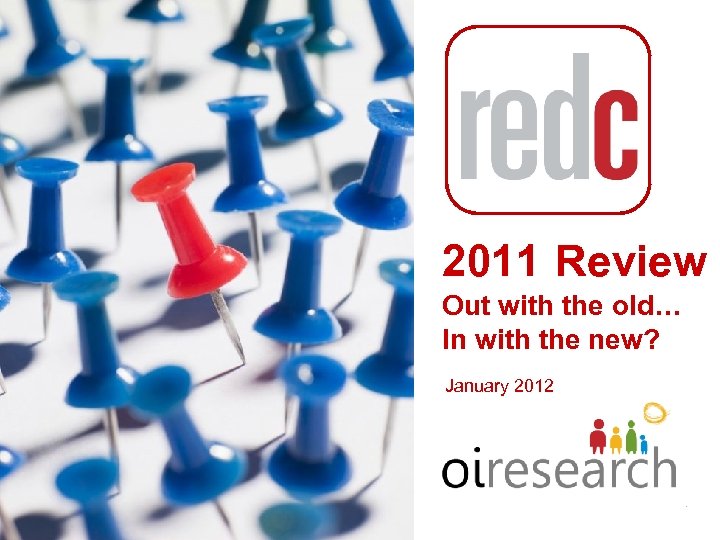 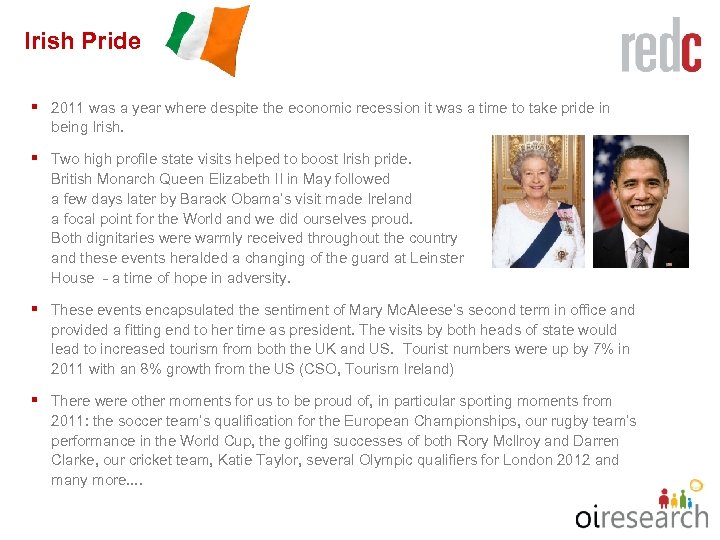 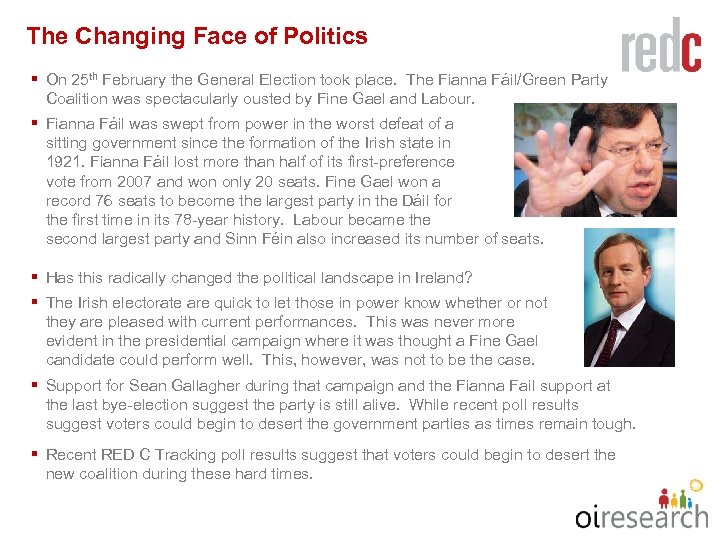 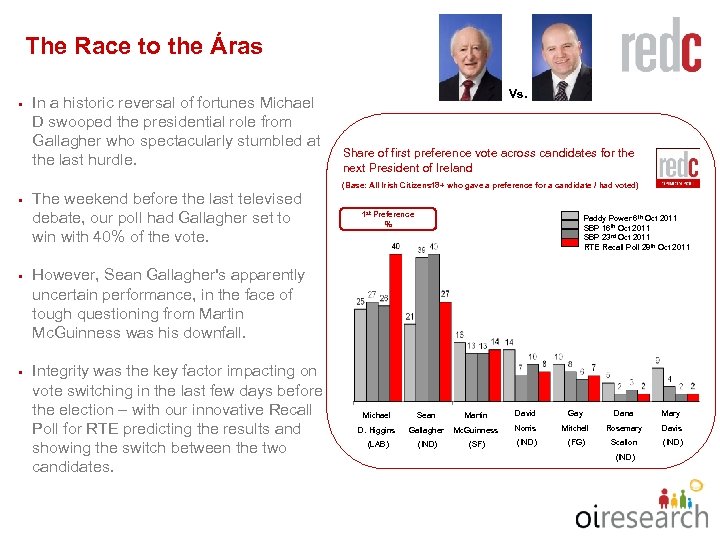 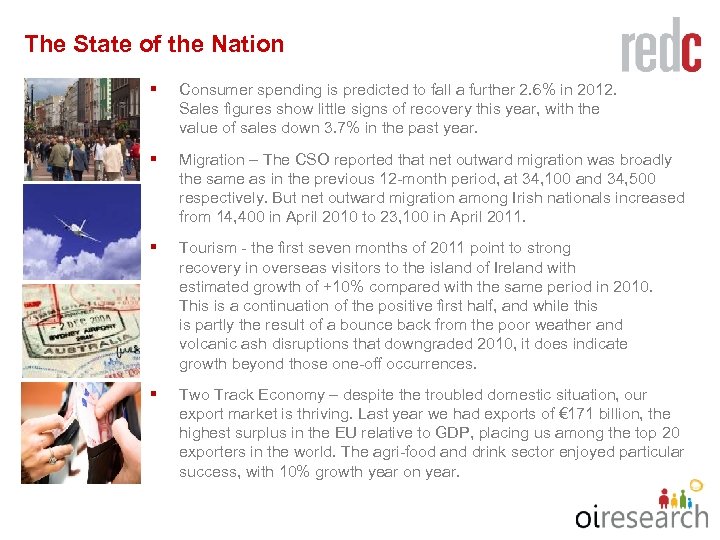 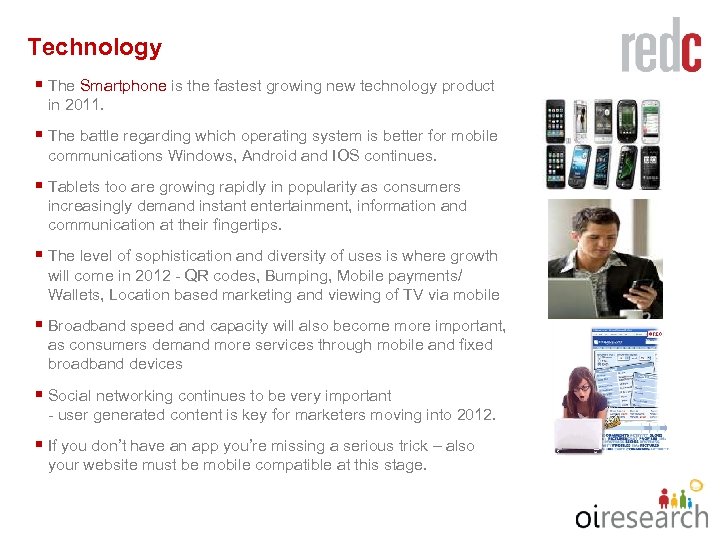 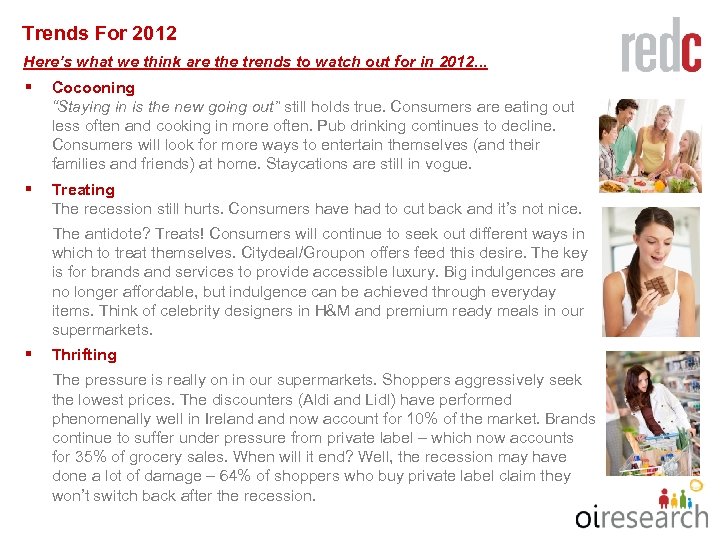 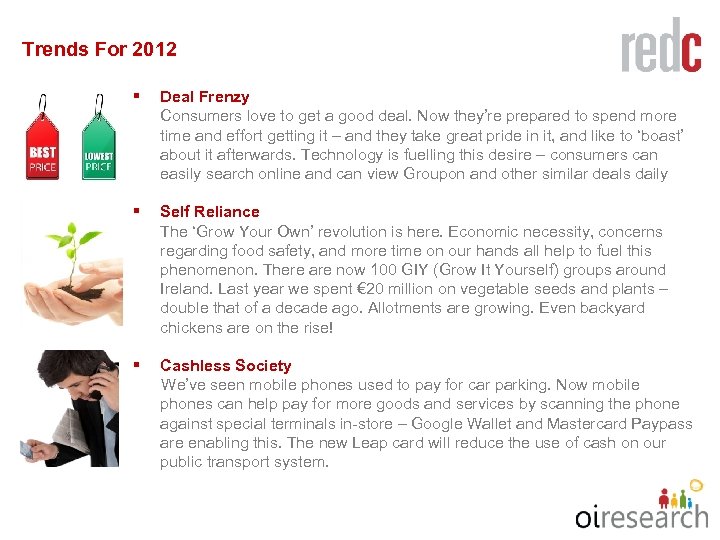 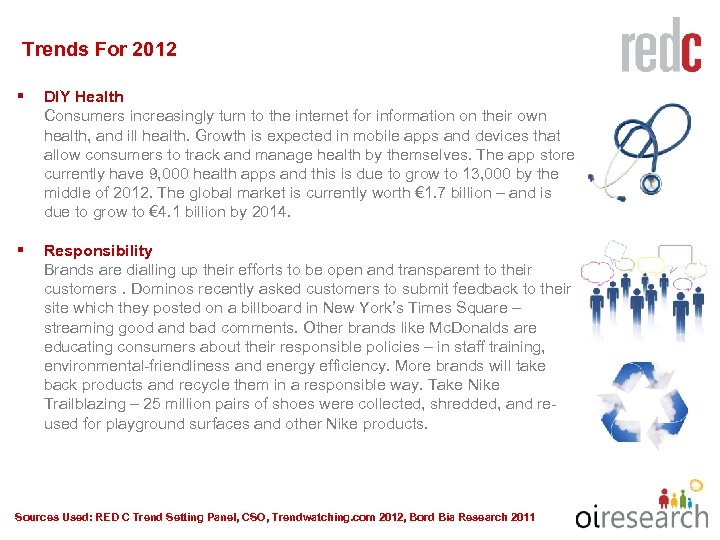 Скачать презентацию 2011 Review Out with the old In with

Irish Pride § 2011 was a year where despite the economic recession it was a time to take pride in being Irish. § Two high profile state visits helped to boost Irish pride. British Monarch Queen Elizabeth II in May followed a few days later by Barack Obama’s visit made Ireland a focal point for the World and we did ourselves proud. Both dignitaries were warmly received throughout the country and these events heralded a changing of the guard at Leinster House - a time of hope in adversity. § These events encapsulated the sentiment of Mary Mc. Aleese’s second term in office and provided a fitting end to her time as president. The visits by both heads of state would lead to increased tourism from both the UK and US. Tourist numbers were up by 7% in 2011 with an 8% growth from the US (CSO, Tourism Ireland) § There were other moments for us to be proud of, in particular sporting moments from 2011: the soccer team’s qualification for the European Championships, our rugby team’s performance in the World Cup, the golfing successes of both Rory Mcllroy and Darren Clarke, our cricket team, Katie Taylor, several Olympic qualifiers for London 2012 and many more. . 2.

The Changing Face of Politics § On 25 th February the General Election took place. The Fianna Fáil/Green Party Coalition was spectacularly ousted by Fine Gael and Labour. § Fianna Fáil was swept from power in the worst defeat of a sitting government since the formation of the Irish state in 1921. Fianna Fáil lost more than half of its first-preference vote from 2007 and won only 20 seats. Fine Gael won a record 76 seats to become the largest party in the Dáil for the first time in its 78 -year history. Labour became the second largest party and Sinn Féin also increased its number of seats. § Has this radically changed the political landscape in Ireland? § The Irish electorate are quick to let those in power know whether or not they are pleased with current performances. This was never more evident in the presidential campaign where it was thought a Fine Gael candidate could perform well. This, however, was not to be the case. § Support for Sean Gallagher during that campaign and the Fianna Fail support at the last bye-election suggest the party is still alive. While recent poll results suggest voters could begin to desert the government parties as times remain tough. § Recent RED C Tracking poll results suggest that voters could begin to desert the new coalition during these hard times. 3.

The Race to the Áras § § In a historic reversal of fortunes Michael D swooped the presidential role from Gallagher who spectacularly stumbled at the last hurdle. The weekend before the last televised debate, our poll had Gallagher set to win with 40% of the vote. Vs. Share of first preference vote across candidates for the next President of Ireland (Base: All Irish Citizens 18+ who gave a preference for a candidate / had voted) 1 st Preference % Paddy Power 6 th Oct 2011 SBP 16 th Oct 2011 SBP 23 rd Oct 2011 RTE Recall Poll 28 th Oct 2011 However, Sean Gallagher's apparently uncertain performance, in the face of tough questioning from Martin Mc. Guinness was his downfall. Integrity was the key factor impacting on vote switching in the last few days before the election – with our innovative Recall Poll for RTE predicting the results and showing the switch between the two candidates. Michael Sean Martin David Gay Dana Mary Mitchell Rosemary Davis (FG) Scallon (IND) D. Higgins Gallagher Mc. Guinness Norris (LAB) (IND) (SF) (IND) 4.

The State of the Nation § Consumer spending is predicted to fall a further 2. 6% in 2012. Sales figures show little signs of recovery this year, with the value of sales down 3. 7% in the past year. § Migration – The CSO reported that net outward migration was broadly the same as in the previous 12 -month period, at 34, 100 and 34, 500 respectively. But net outward migration among Irish nationals increased from 14, 400 in April 2010 to 23, 100 in April 2011. § Tourism - the first seven months of 2011 point to strong recovery in overseas visitors to the island of Ireland with estimated growth of +10% compared with the same period in 2010. This is a continuation of the positive first half, and while this is partly the result of a bounce back from the poor weather and volcanic ash disruptions that downgraded 2010, it does indicate growth beyond those one-off occurrences. § Two Track Economy – despite the troubled domestic situation, our export market is thriving. Last year we had exports of € 171 billion, the highest surplus in the EU relative to GDP, placing us among the top 20 exporters in the world. The agri-food and drink sector enjoyed particular success, with 10% growth year on year. 5.

The Credit Crunch § The situation in Europe is causing consumer concerns over the prospect of a double dip recession. § There is a decline in happiness among Irish consumers since last year, with more people suggesting their quality of life, motivation and energy have decreased. Our most recent survey at the Budget in fact showed that Irish people were the least happy of all countries in Europe. § Consumers are however considering increasing their spend on socialising and consumer goods over the next 12 months, in particular the younger 18 -34 year olds. § Grocery spend is unlikely to increase with the discounters continuing to perform well. Musgrave have taken over Superquinn and are likely to embed their strategies throughout 2012. Consumers still see value as the key driver for grocery spend. § As we move into 2012 there is increasing uncertainty and a lack of understanding among consumers with regard to the Euro and what the options and prospects are for the European economy and where we fit within this context. This could be an entirely new, albeit unwanted change in a new economic direction. § These uncharted waters are clearly a concern for consumers and are impacting negatively on consumer confidence. 6.

Technology § The Smartphone is the fastest growing new technology product in 2011. § The battle regarding which operating system is better for mobile communications Windows, Android and IOS continues. § Tablets too are growing rapidly in popularity as consumers increasingly demand instant entertainment, information and communication at their fingertips. § The level of sophistication and diversity of uses is where growth will come in 2012 - QR codes, Bumping, Mobile payments/ Wallets, Location based marketing and viewing of TV via mobile § Broadband speed and capacity will also become more important, as consumers demand more services through mobile and fixed broadband devices § Social networking continues to be very important - user generated content is key for marketers moving into 2012. § If you don’t have an app you’re missing a serious trick – also your website must be mobile compatible at this stage. 7.

What does this mean for 2012? § Politics We are likely to maintain the new government. But reform through referenda will be a consistent theme during the year – potentially putting pressure on the government parties § Ireland is open for business This was the rally cry from the new government earlier this year. The uncertainty currently evident around the Euro continues to cause concern. Protecting our corporation tax rate and our position within the EU are critical. While exports currently do well and tourism appears to be recovering – is this enough § Brand Ireland Our sense of community continues to be something which sets us apart. This is likely to continue and something which we manage to foster even more in the tougher times. § Is there anything to look forward to in 2012? We will continue to take pleasure in the everyday things that inherently make us Irish and thus our Irish pride will continue to grow. We will most likely have wins in the London Olympics and have high hopes for the performance of our soccer team in Euro 2012. 8.

Trends For 2012 Here’s what we think are the trends to watch out for in 2012. . . § Cocooning “Staying in is the new going out” still holds true. Consumers are eating out less often and cooking in more often. Pub drinking continues to decline. Consumers will look for more ways to entertain themselves (and their families and friends) at home. Staycations are still in vogue. § Treating The recession still hurts. Consumers have had to cut back and it’s not nice. The antidote? Treats! Consumers will continue to seek out different ways in which to treat themselves. Citydeal/Groupon offers feed this desire. The key is for brands and services to provide accessible luxury. Big indulgences are no longer affordable, but indulgence can be achieved through everyday items. Think of celebrity designers in H&M and premium ready meals in our supermarkets. § Thrifting The pressure is really on in our supermarkets. Shoppers aggressively seek the lowest prices. The discounters (Aldi and Lidl) have performed phenomenally well in Ireland now account for 10% of the market. Brands continue to suffer under pressure from private label – which now accounts for 35% of grocery sales. When will it end? Well, the recession may have done a lot of damage – 64% of shoppers who buy private label claim they won’t switch back after the recession. 9.

Trends For 2012 § Deal Frenzy Consumers love to get a good deal. Now they’re prepared to spend more time and effort getting it – and they take great pride in it, and like to ‘boast’ about it afterwards. Technology is fuelling this desire – consumers can easily search online and can view Groupon and other similar deals daily § Self Reliance The ‘Grow Your Own’ revolution is here. Economic necessity, concerns regarding food safety, and more time on our hands all help to fuel this phenomenon. There are now 100 GIY (Grow It Yourself) groups around Ireland. Last year we spent € 20 million on vegetable seeds and plants – double that of a decade ago. Allotments are growing. Even backyard chickens are on the rise! § Cashless Society We’ve seen mobile phones used to pay for car parking. Now mobile phones can help pay for more goods and services by scanning the phone against special terminals in-store – Google Wallet and Mastercard Paypass are enabling this. The new Leap card will reduce the use of cash on our public transport system. 10.

Trends For 2012 § DIY Health Consumers increasingly turn to the internet for information on their own health, and ill health. Growth is expected in mobile apps and devices that allow consumers to track and manage health by themselves. The app store currently have 9, 000 health apps and this is due to grow to 13, 000 by the middle of 2012. The global market is currently worth € 1. 7 billion – and is due to grow to € 4. 1 billion by 2014. § Responsibility Brands are dialling up their efforts to be open and transparent to their customers. Dominos recently asked customers to submit feedback to their site which they posted on a billboard in New York’s Times Square – streaming good and bad comments. Other brands like Mc. Donalds are educating consumers about their responsible policies – in staff training, environmental-friendliness and energy efficiency. More brands will take back products and recycle them in a responsible way. Take Nike Trailblazing – 25 million pairs of shoes were collected, shredded, and reused for playground surfaces and other Nike products. 11. Sources Used: RED C Trend Setting Panel, CSO, Trendwatching. com 2012, Bord Bia Research 2011