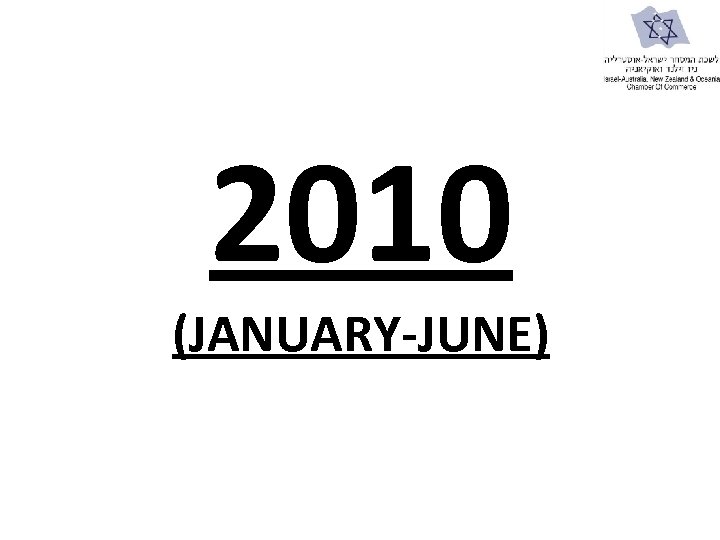 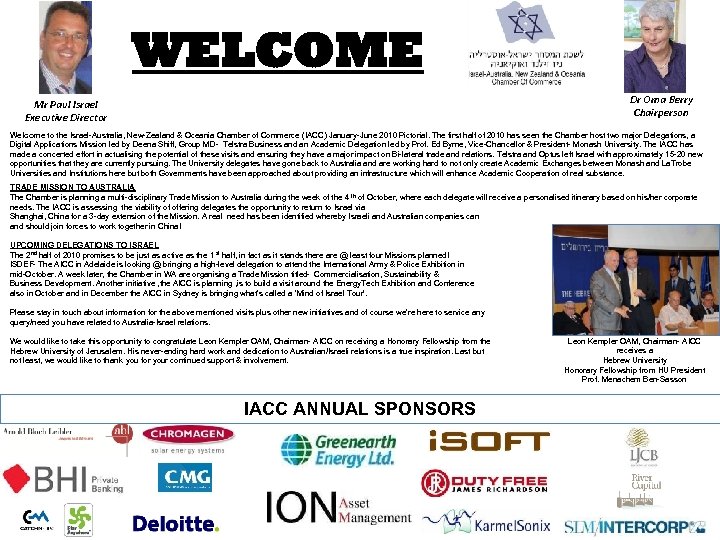 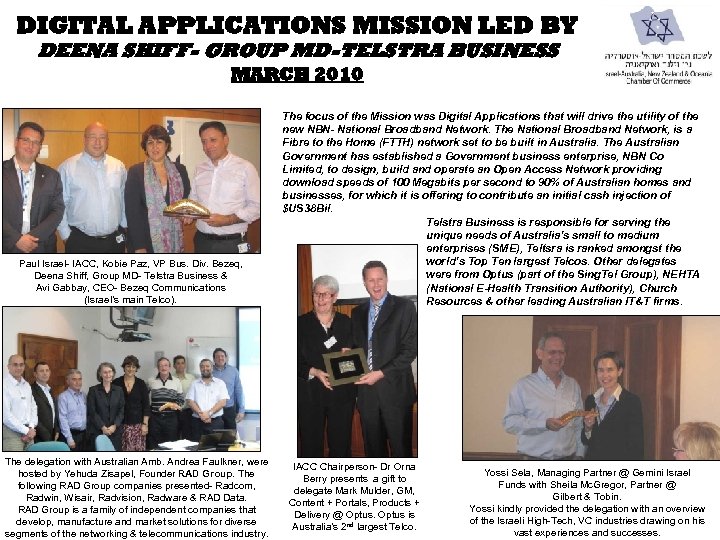 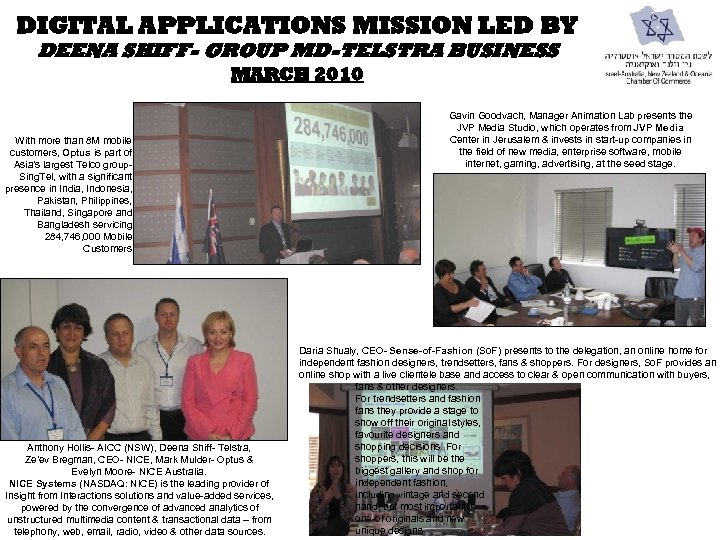 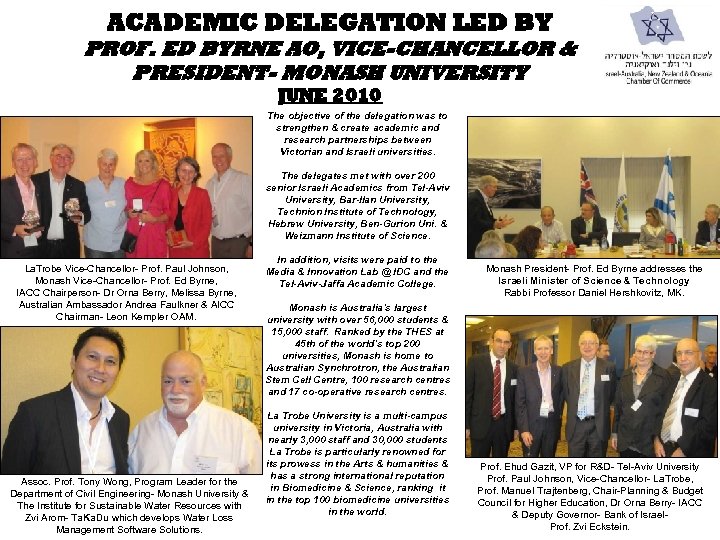 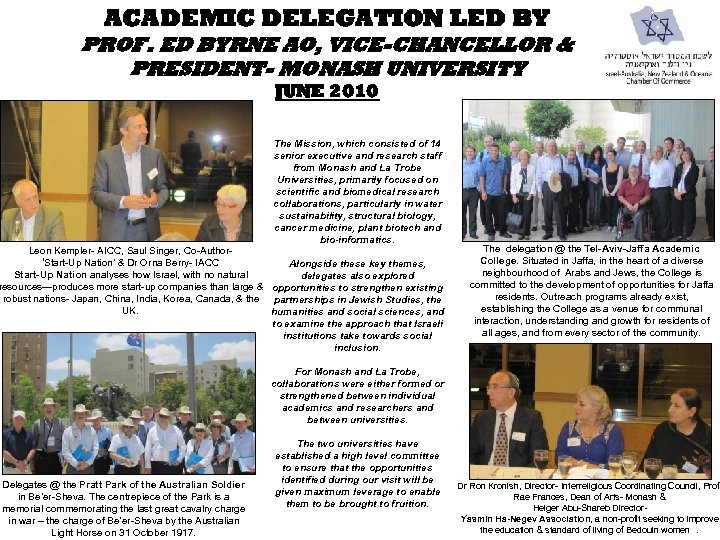 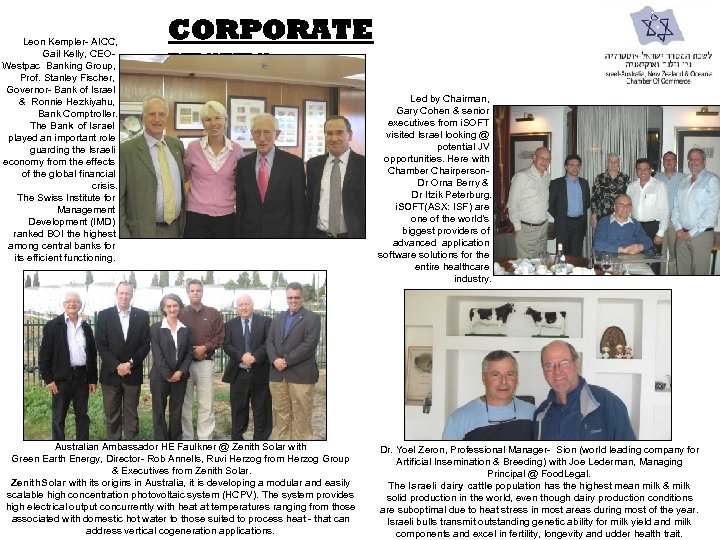 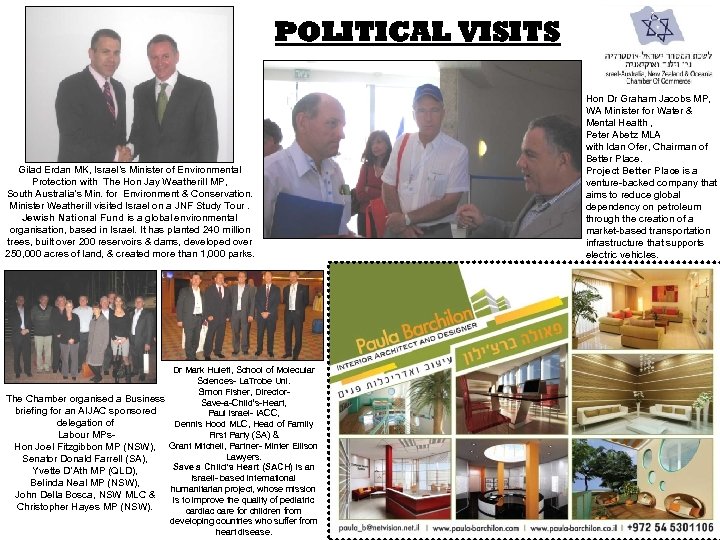 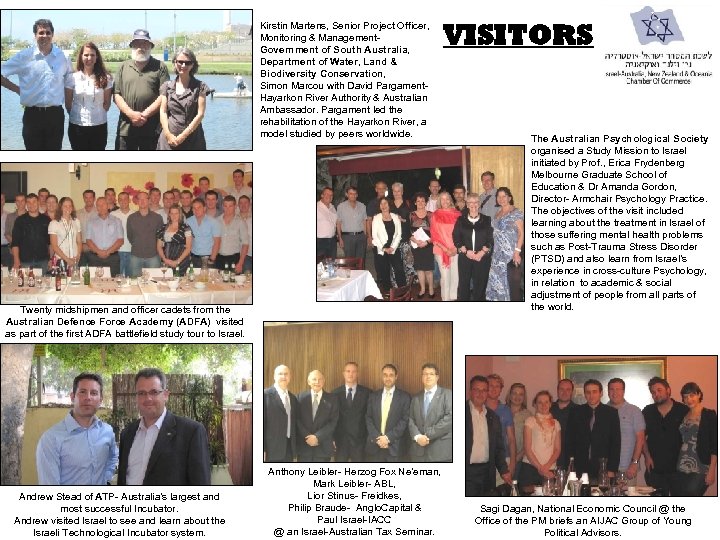 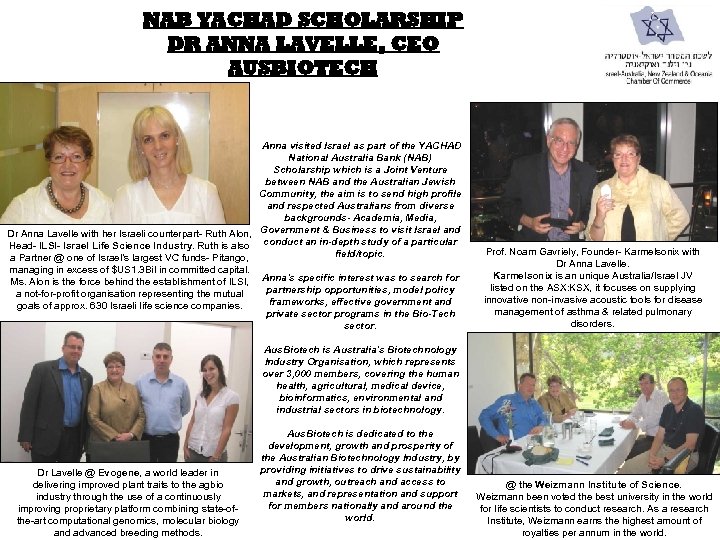 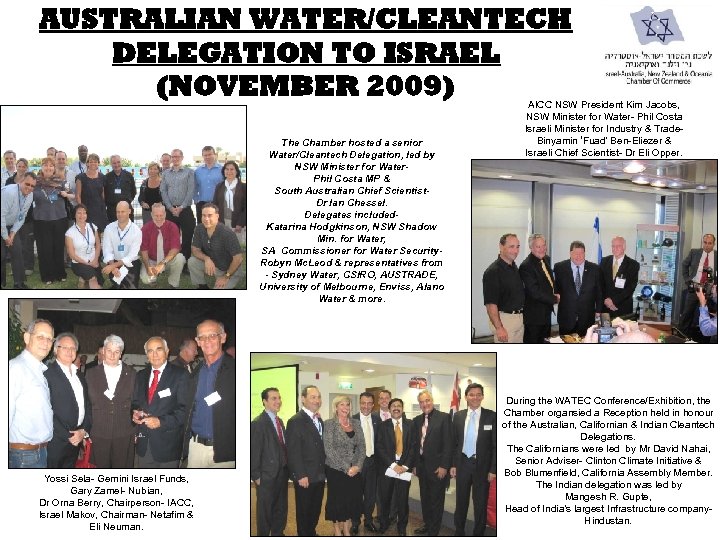 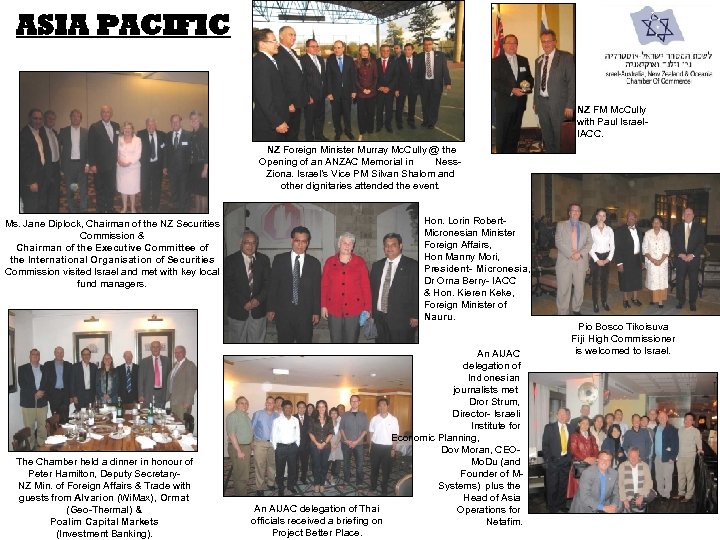 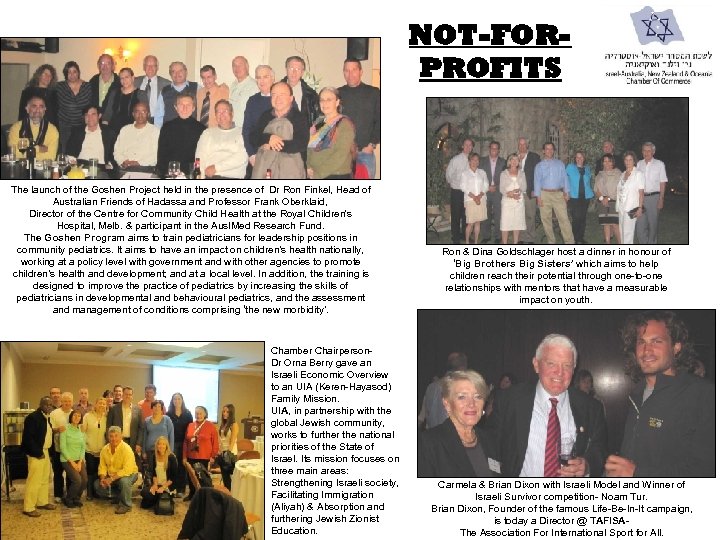 WELCOME Dr Orna Berry Chairperson Mr Paul Israel Executive Director Welcome to the Israel-Australia, New-Zealand & Oceania Chamber of Commerce (IACC) January-June 2010 Pictorial. The first half of 2010 has seen the Chamber host two major Delegations, a Digital Applications Mission led by Deena Shiff, Group MD- Telstra Business and an Academic Delegation led by Prof. Ed Byrne, Vice-Chancellor & President- Monash University. The IACC has made a concerted effort in actualising the potential of these visits and ensuring they have a major impact on Bi-lateral trade and relations. Telstra and Optus left Israel with approximately 15 -20 new opportunities that they are currently pursuing. The University delegates have gone back to Australia and are working hard to not only create Academic Exchanges between Monash and La. Trobe Universities and Institutions here but both Governments have been approached about providing an infrastructure which will enhance Academic Cooperation of real substance. TRADE MISSION TO AUSTRALIA The Chamber is planning a multi-disciplinary Trade Mission to Australia during the week of the 4 th of October, where each delegate will receive a personalised itinerary based on his/her corporate needs. The IACC is assessing the viability of offering delegates the opportunity to return to Israel via Shanghai, China for a 3 -day extension of the Mission. A real need has been identified whereby Israeli and Australian companies can and should join forces to work together in China! UPCOMING DELEGATIONS TO ISRAEL The 2 nd half of 2010 promises to be just as active as the 1 st half, in fact as it stands there are @ least four Missions planned! ISDEF- The AICC in Adelaide is looking @ bringing a high-level delegation to attend the International Army & Police Exhibition in mid-October. A week later, the Chamber in WA are organising a Trade Mission titled- Commercialisation, Sustainability & Business Development. Another initiative , the AICC is planning , is to build a visit around the Energy. Tech Exhibition and Conference also in October and in December the AICC in Sydney is bringing what’s called a ‘Mind of Israel Tour’. Please stay in touch about information for the above mentioned visits plus other new initiatives and of course we’re here to service any query/need you have related to Australia-Israel relations. We would like to take this opportunity to congratulate Leon Kempler OAM, Chairman- AICC on receiving a Honorary Fellowship from the Hebrew University of Jerusalem. His never-ending hard work and dedication to Australian/Israeli relations is a true inspiration. Last but not least, we would like to thank you for your continued support & involvement. IACC ANNUAL SPONSORS Leon Kempler OAM, Chairman- AICC receives a Hebrew University Honorary Fellowship from HU President Prof. Menachem Ben-Sasson

ACADEMIC DELEGATION LED BY PROF. ED BYRNE AO, VICE-CHANCELLOR & PRESIDENT- MONASH UNIVERSITY JUNE 2010 The Mission, which consisted of 14 senior executive and research staff from Monash and La Trobe Universities, primarily focused on scientific and biomedical research collaborations, particularly in water sustainability, structural biology, cancer medicine, plant biotech and bio-informatics. Leon Kempler- AICC, Saul Singer, Co-Author‘Start-Up Nation’ & Dr Orna Berry- IACC Alongside these key themes, Start-Up Nation analyses how Israel, with no natural delegates also explored resources—produces more start-up companies than large & opportunities to strengthen existing robust nations- Japan, China, India, Korea, Canada, & the partnerships in Jewish Studies, the UK. humanities and social sciences, and to examine the approach that Israeli institutions take towards social inclusion. The delegation @ the Tel-Aviv-Jaffa Academic College. Situated in Jaffa, in the heart of a diverse neighbourhood of Arabs and Jews, the College is committed to the development of opportunities for Jaffa residents. Outreach programs already exist, establishing the College as a venue for communal interaction, understanding and growth for residents of all ages, and from every sector of the community. For Monash and La Trobe, collaborations were either formed or strengthened between individual academics and researchers and between universities. Delegates @ the Pratt Park of the Australian Soldier in Be’er-Sheva. The centrepiece of the Park is a memorial commemorating the last great cavalry charge in war – the charge of Be’er-Sheva by the Australian Light Horse on 31 October 1917. The two universities have established a high level committee to ensure that the opportunities identified during our visit will be given maximum leverage to enable them to be brought to fruition. Dr Ron Kronish, Director- Interreligious Coordinating Council, Prof. Rae Frances, Dean of Arts- Monash & Heiger Abu-Shareb Director. Yasmin Ha-Negev Association, a non-profit seeking to improve the education & standard of living of Bedouin women.

NAB YACHAD SCHOLARSHIP DR ANNA LAVELLE, CEO AUSBIOTECH Anna visited Israel as part of the YACHAD National Australia Bank (NAB) Scholarship which is a Joint Venture between NAB and the Australian Jewish Community, the aim is to send high profile and respected Australians from diverse backgrounds- Academia, Media, Government & Business to visit Israel and Dr Anna Lavelle with her Israeli counterpart- Ruth Alon, Head- ILSI- Israel Life Science Industry. Ruth is also conduct an in-depth study of a particular field/topic. a Partner @ one of Israel’s largest VC funds- Pitango, managing in excess of $US 1. 3 Bil in committed capital. Ms. Alon is the force behind the establishment of ILSI, Anna's specific interest was to search for partnership opportunities, model policy a not-for-profit organisation representing the mutual frameworks, effective government and goals of approx. 630 Israeli life science companies. private sector programs in the Bio-Tech sector. Prof. Noam Gavriely, Founder- Karmelsonix with Dr Anna Lavelle. Karmelsonix is an unique Australia/Israel JV listed on the ASX: KSX, it focuses on supplying innovative non-invasive acoustic tools for disease management of asthma & related pulmonary disorders. Aus. Biotech is Australia's Biotechnology Industry Organisation, which represents over 3, 000 members, covering the human health, agricultural, medical device, bioinformatics, environmental and industrial sectors in biotechnology. Dr Lavelle @ Evogene, a world leader in delivering improved plant traits to the agbio industry through the use of a continuously improving proprietary platform combining state-ofthe-art computational genomics, molecular biology and advanced breeding methods. Aus. Biotech is dedicated to the development, growth and prosperity of the Australian Biotechnology Industry, by providing initiatives to drive sustainability and growth, outreach and access to markets, and representation and support for members nationally and around the world. @ the Weizmann Institute of Science. Weizmann been voted the best university in the world for life scientists to conduct research. As a research Institute, Weizmann earns the highest amount of royalties per annum in the world.

NOT-FORPROFITS The launch of the Goshen Project held in the presence of Dr Ron Finkel, Head of Australian Friends of Hadassa and Professor Frank Oberklaid, Director of the Centre for Community Child Health at the Royal Children's Hospital, Melb. & participant in the Aus. IMed Research Fund. The Goshen Program aims to train pediatricians for leadership positions in community pediatrics. It aims to have an impact on children’s health nationally, working at a policy level with government and with other agencies to promote children’s health and development; and at a local level. In addition, the training is designed to improve the practice of pediatrics by increasing the skills of pediatricians in developmental and behavioural pediatrics, and the assessment and management of conditions comprising ‘the new morbidity’. Chamber Chairperson. Dr Orna Berry gave an Israeli Economic Overview to an UIA (Keren-Hayasod) Family Mission. UIA, in partnership with the global Jewish community, works to further the national priorities of the State of Israel. Its mission focuses on three main areas: Strengthening Israeli society, Facilitating Immigration (Aliyah) & Absorption and furthering Jewish Zionist Education. Ron & Dina Goldschlager host a dinner in honour of ‘Big Brothers Big Sisters’ which aims to help children reach their potential through one-to-one relationships with mentors that have a measurable impact on youth. Carmela & Brian Dixon with Israeli Model and Winner of Israeli Survivor competition- Noam Tur. Brian Dixon, Founder of the famous Life-Be-In-It campaign, is today a Director @ TAFISAThe Association For International Sport for All.