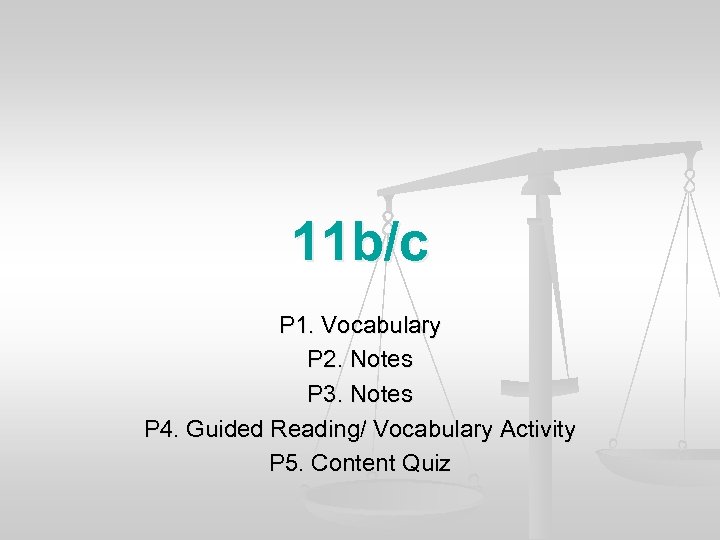 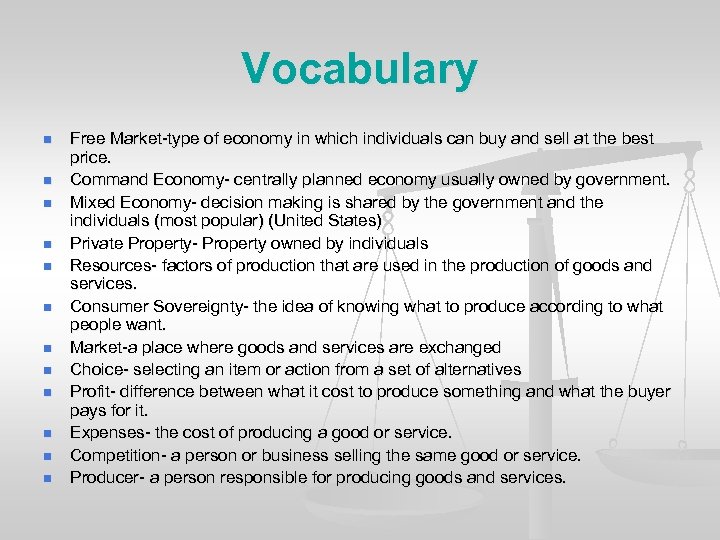 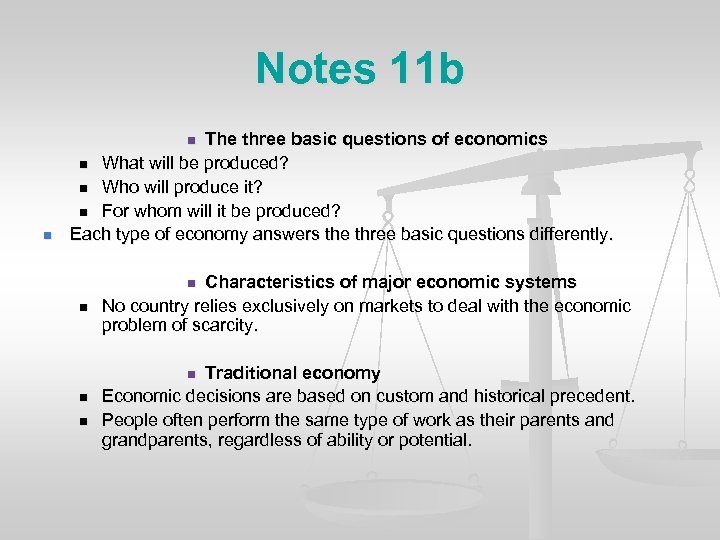 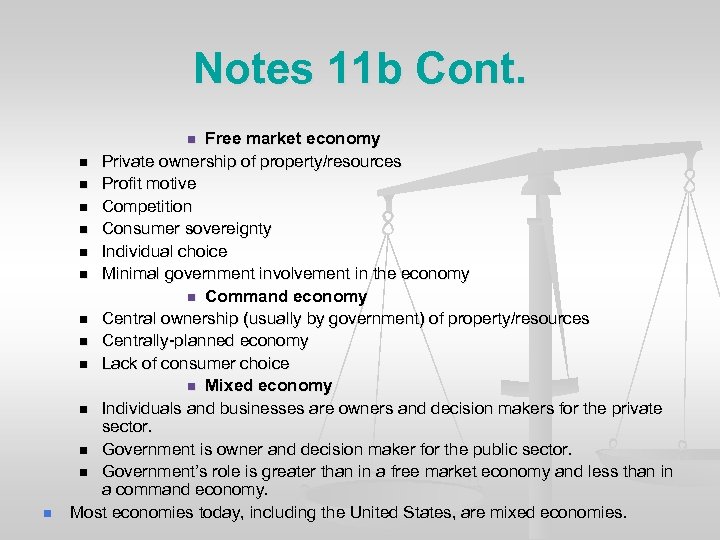 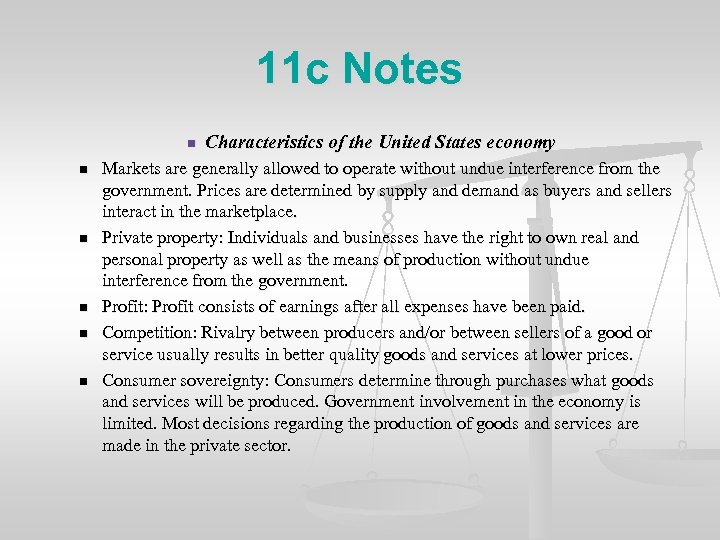 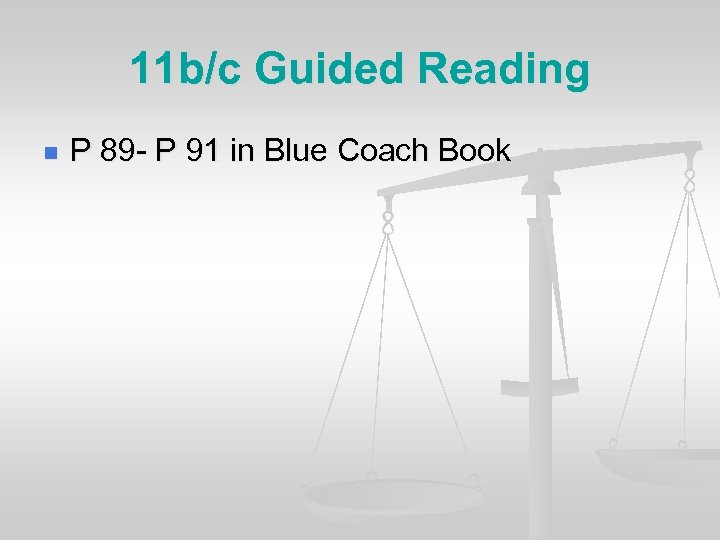 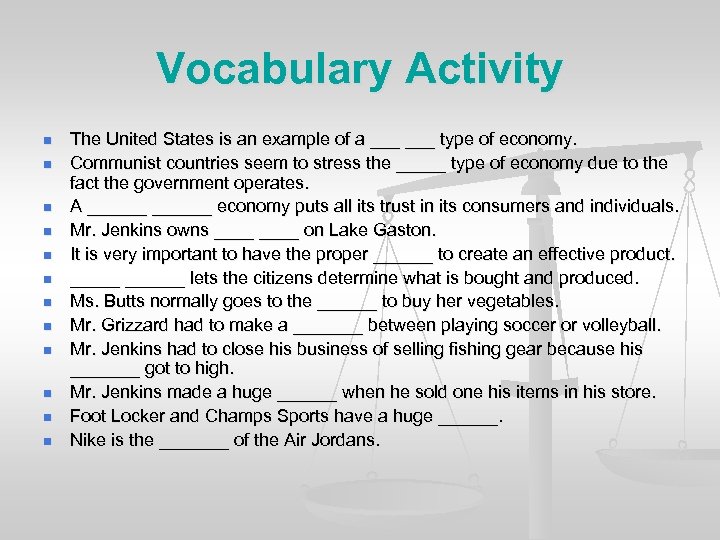 Vocabulary n n n Free Market-type of economy in which individuals can buy and sell at the best price. Command Economy- centrally planned economy usually owned by government. Mixed Economy- decision making is shared by the government and the individuals (most popular) (United States) Private Property- Property owned by individuals Resources- factors of production that are used in the production of goods and services. Consumer Sovereignty- the idea of knowing what to produce according to what people want. Market-a place where goods and services are exchanged Choice- selecting an item or action from a set of alternatives Profit- difference between what it cost to produce something and what the buyer pays for it. Expenses- the cost of producing a good or service. Competition- a person or business selling the same good or service. Producer- a person responsible for producing goods and services.

Notes 11 b The three basic questions of economics n What will be produced? n Who will produce it? n For whom will it be produced? Each type of economy answers the three basic questions differently. n n Characteristics of major economic systems No country relies exclusively on markets to deal with the economic problem of scarcity. n n Traditional economy Economic decisions are based on custom and historical precedent. People often perform the same type of work as their parents and grandparents, regardless of ability or potential. n n n

11 c Notes n n n Characteristics of the United States economy Markets are generally allowed to operate without undue interference from the government. Prices are determined by supply and demand as buyers and sellers interact in the marketplace. Private property: Individuals and businesses have the right to own real and personal property as well as the means of production without undue interference from the government. Profit: Profit consists of earnings after all expenses have been paid. Competition: Rivalry between producers and/or between sellers of a good or service usually results in better quality goods and services at lower prices. Consumer sovereignty: Consumers determine through purchases what goods and services will be produced. Government involvement in the economy is limited. Most decisions regarding the production of goods and services are made in the private sector.

Vocabulary Activity n n n The United States is an example of a ___ type of economy. Communist countries seem to stress the _____ type of economy due to the fact the government operates. A ______ economy puts all its trust in its consumers and individuals. Mr. Jenkins owns ____ on Lake Gaston. It is very important to have the proper ______ to create an effective product. ______ lets the citizens determine what is bought and produced. Ms. Butts normally goes to the ______ to buy her vegetables. Mr. Grizzard had to make a _______ between playing soccer or volleyball. Mr. Jenkins had to close his business of selling fishing gear because his _______ got to high. Mr. Jenkins made a huge ______ when he sold one his items in his store. Foot Locker and Champs Sports have a huge ______. Nike is the _______ of the Air Jordans.

Lecture 11 Vocabulary as a system Types