1 of 14 CONCEPCION Capital of the Bio 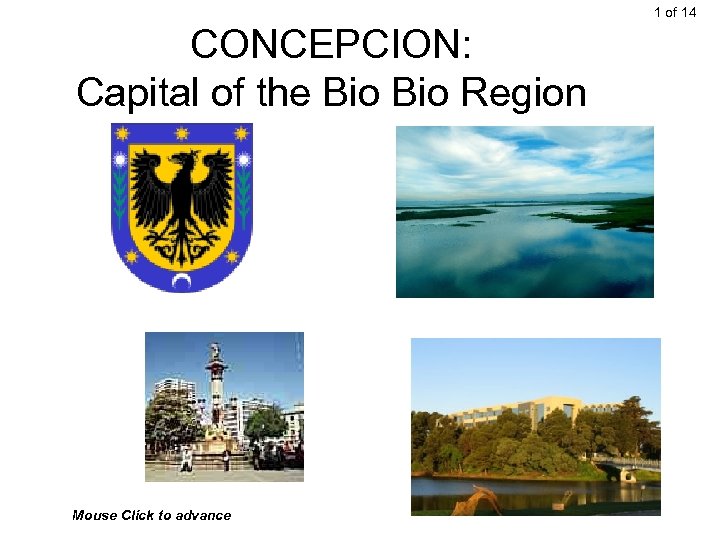 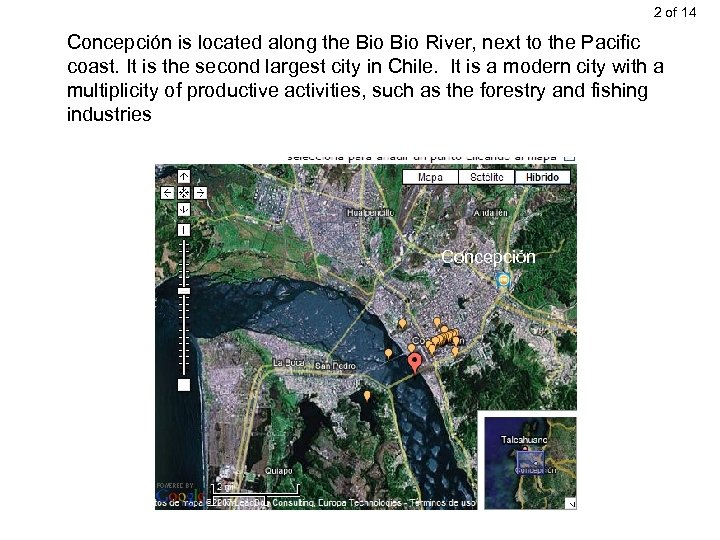 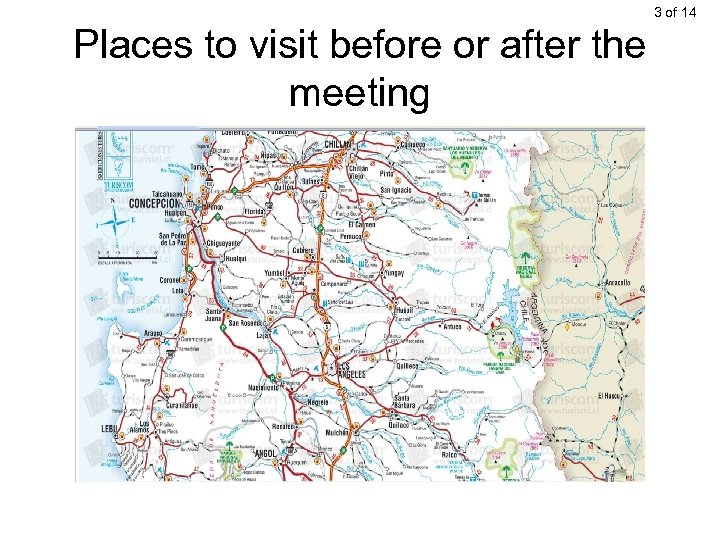 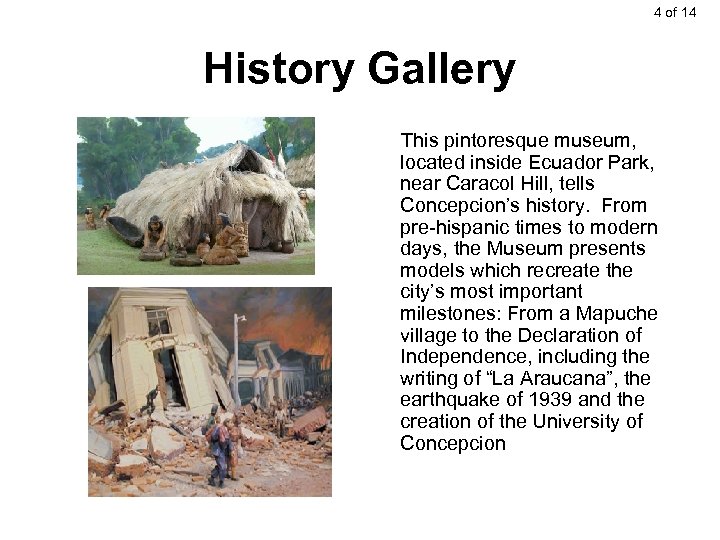 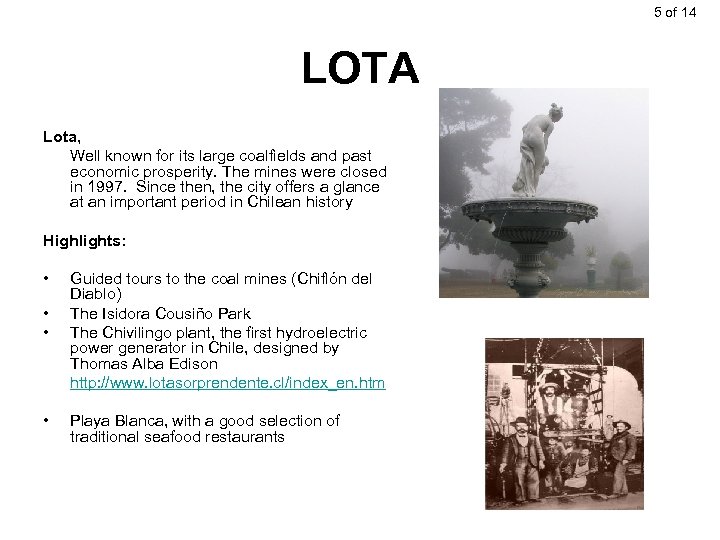 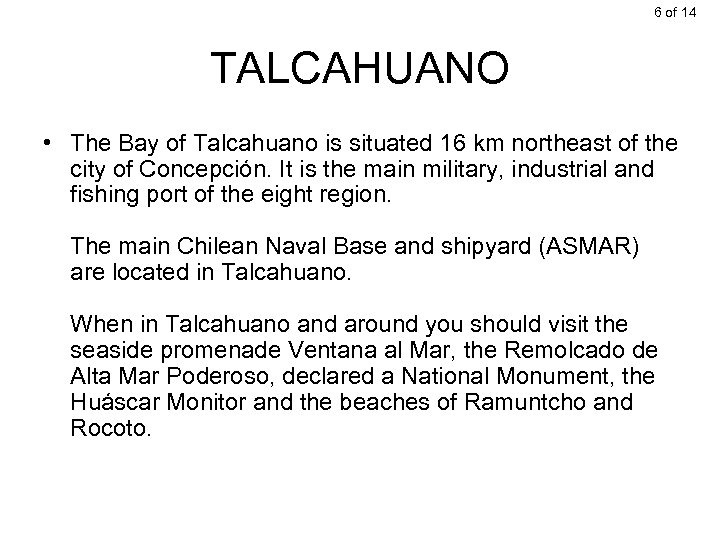 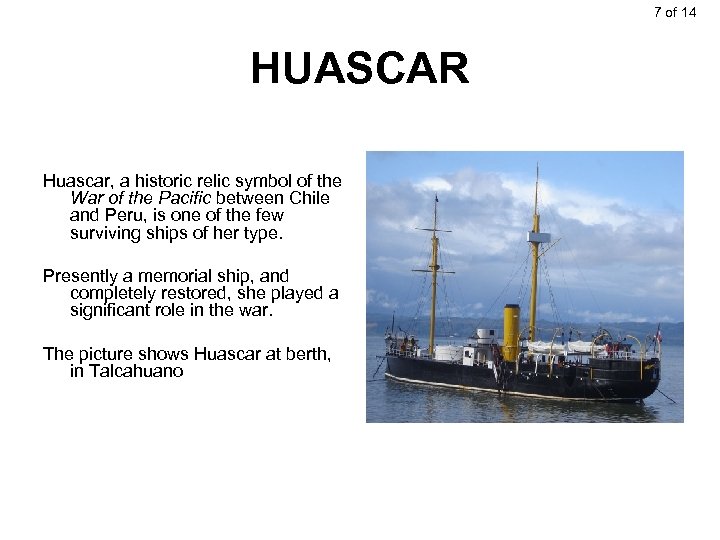 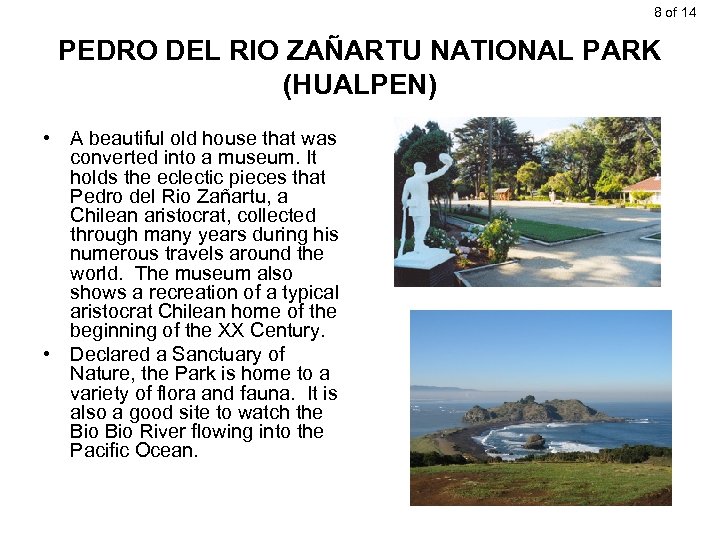 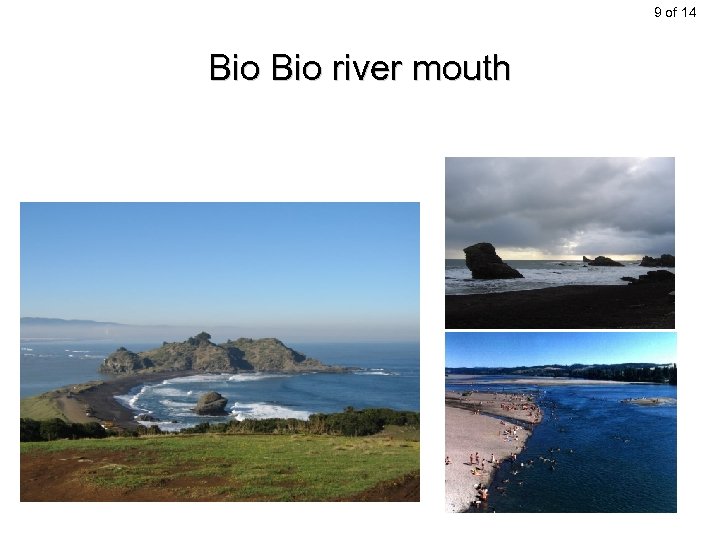 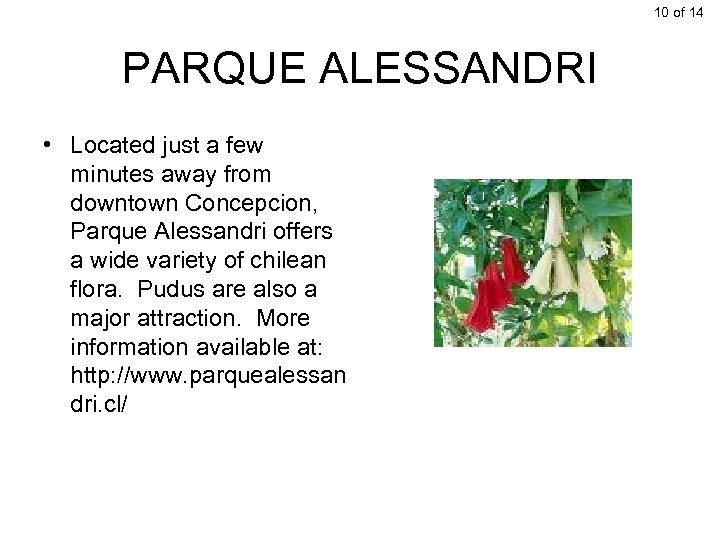 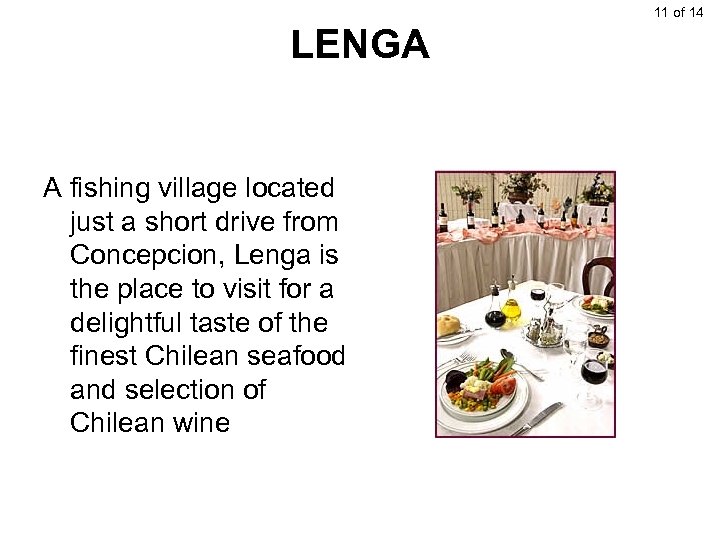 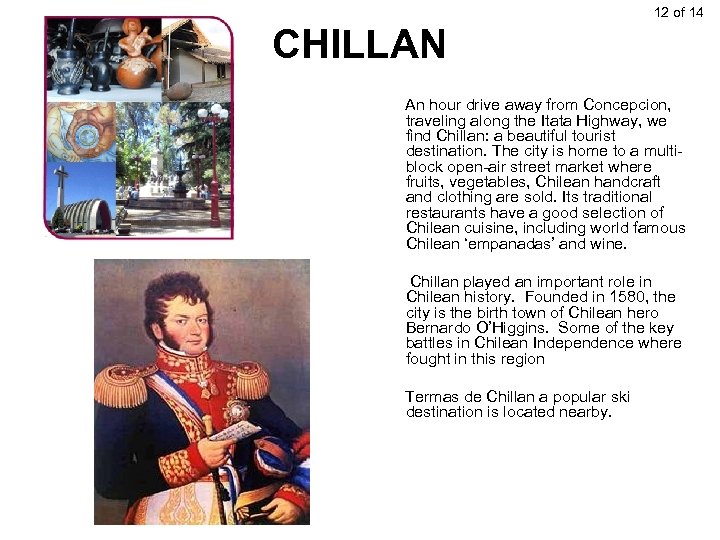 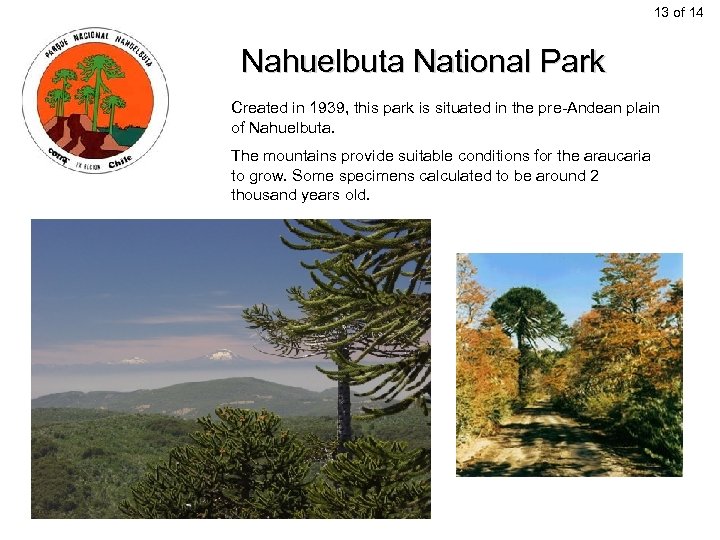 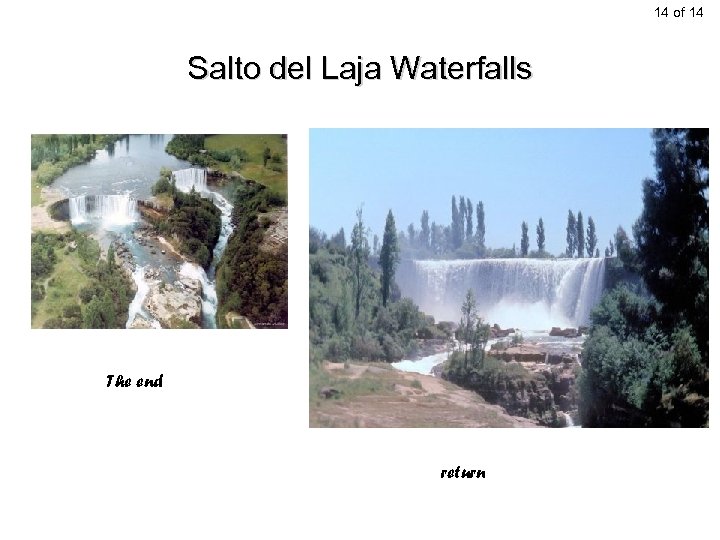 Скачать презентацию 1 of 14 CONCEPCION Capital of the Bio

1 of 14 CONCEPCION: Capital of the Bio Region Mouse Click to advance

2 of 14 Concepción is located along the Bio River, next to the Pacific coast. It is the second largest city in Chile. It is a modern city with a multiplicity of productive activities, such as the forestry and fishing industries Concepción

3 of 14 Places to visit before or after the meeting

4 of 14 History Gallery This pintoresque museum, located inside Ecuador Park, near Caracol Hill, tells Concepcion’s history. From pre-hispanic times to modern days, the Museum presents models which recreate the city’s most important milestones: From a Mapuche village to the Declaration of Independence, including the writing of “La Araucana”, the earthquake of 1939 and the creation of the University of Concepcion

5 of 14 LOTA Lota, Well known for its large coalfields and past economic prosperity. The mines were closed in 1997. Since then, the city offers a glance at an important period in Chilean history Highlights: • • • Guided tours to the coal mines (Chiflón del Diablo) The Isidora Cousiño Park The Chivilingo plant, the first hydroelectric power generator in Chile, designed by Thomas Alba Edison http: //www. lotasorprendente. cl/index_en. htm • Playa Blanca, with a good selection of traditional seafood restaurants

6 of 14 TALCAHUANO • The Bay of Talcahuano is situated 16 km northeast of the city of Concepción. It is the main military, industrial and fishing port of the eight region. The main Chilean Naval Base and shipyard (ASMAR) are located in Talcahuano. When in Talcahuano and around you should visit the seaside promenade Ventana al Mar, the Remolcado de Alta Mar Poderoso, declared a National Monument, the Huáscar Monitor and the beaches of Ramuntcho and Rocoto.

7 of 14 HUASCAR Huascar, a historic relic symbol of the War of the Pacific between Chile and Peru, is one of the few surviving ships of her type. Presently a memorial ship, and completely restored, she played a significant role in the war. The picture shows Huascar at berth, in Talcahuano

8 of 14 PEDRO DEL RIO ZAÑARTU NATIONAL PARK (HUALPEN) • A beautiful old house that was converted into a museum. It holds the eclectic pieces that Pedro del Rio Zañartu, a Chilean aristocrat, collected through many years during his numerous travels around the world. The museum also shows a recreation of a typical aristocrat Chilean home of the beginning of the XX Century. • Declared a Sanctuary of Nature, the Park is home to a variety of flora and fauna. It is also a good site to watch the Bio River flowing into the Pacific Ocean.

11 of 14 LENGA A fishing village located just a short drive from Concepcion, Lenga is the place to visit for a delightful taste of the finest Chilean seafood and selection of Chilean wine

12 of 14 CHILLAN An hour drive away from Concepcion, traveling along the Itata Highway, we find Chillan: a beautiful tourist destination. The city is home to a multiblock open-air street market where fruits, vegetables, Chilean handcraft and clothing are sold. Its traditional restaurants have a good selection of Chilean cuisine, including world famous Chilean ‘empanadas’ and wine. Chillan played an important role in Chilean history. Founded in 1580, the city is the birth town of Chilean hero Bernardo O’Higgins. Some of the key battles in Chilean Independence where fought in this region Termas de Chillan a popular ski destination is located nearby.

13 of 14 Nahuelbuta National Park Created in 1939, this park is situated in the pre-Andean plain of Nahuelbuta. The mountains provide suitable conditions for the araucaria to grow. Some specimens calculated to be around 2 thousand years old.