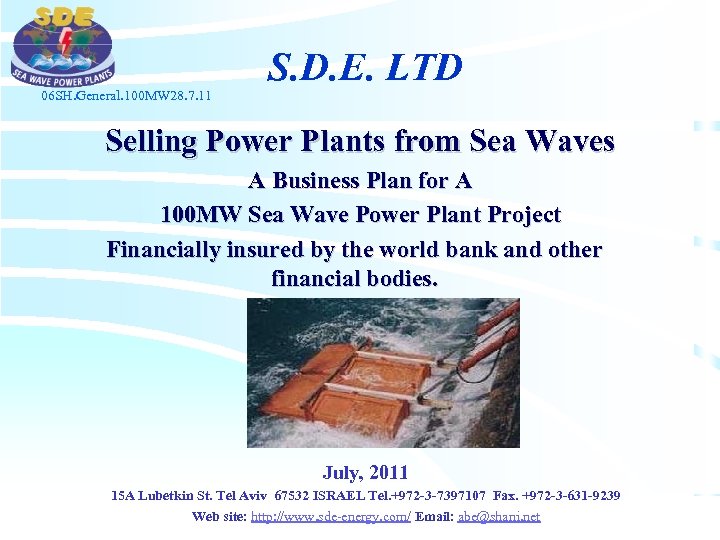 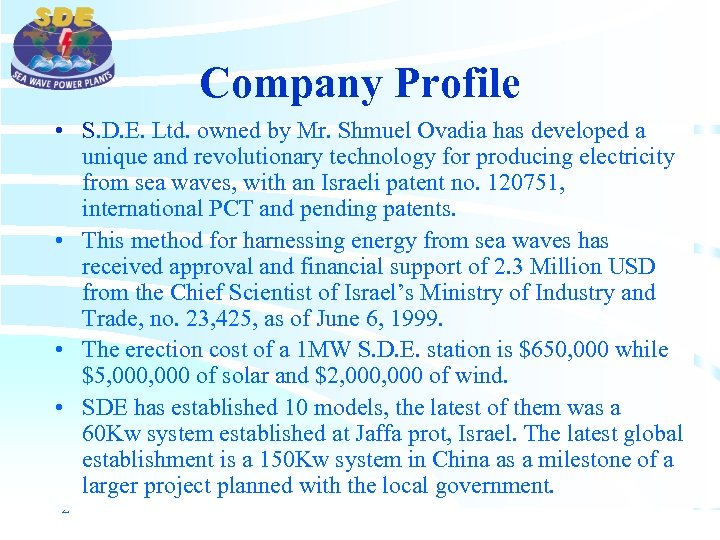 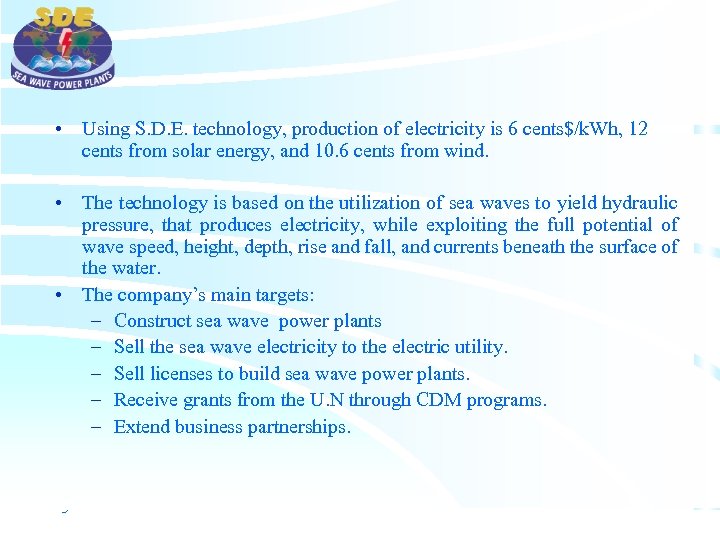 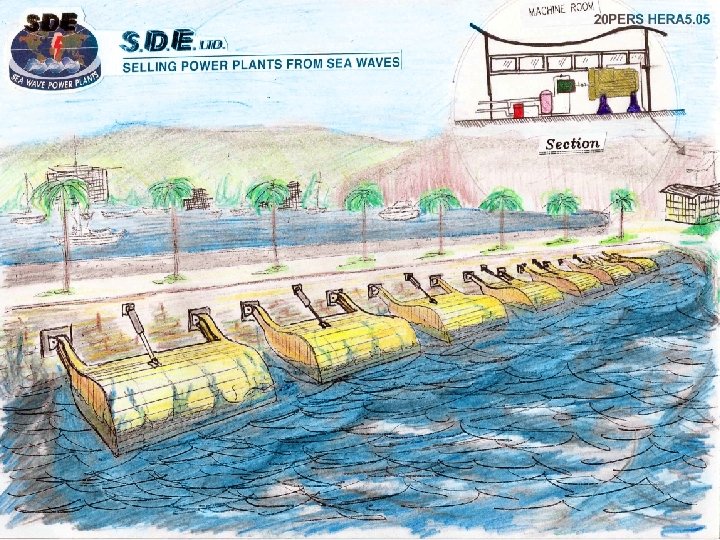 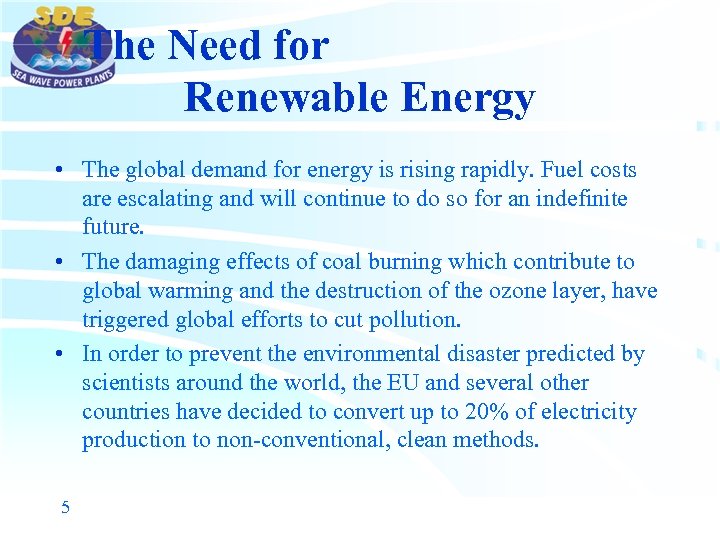 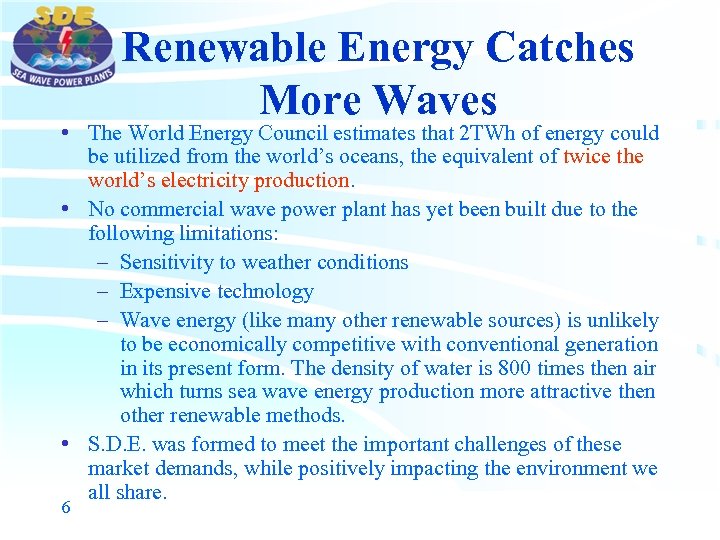 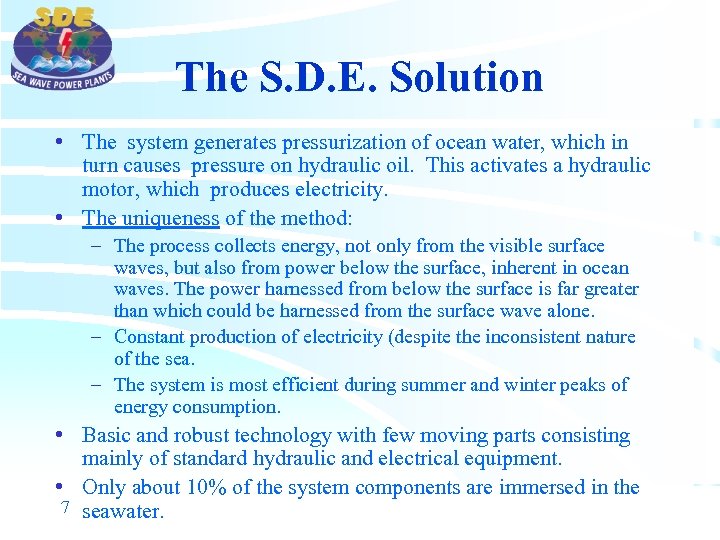 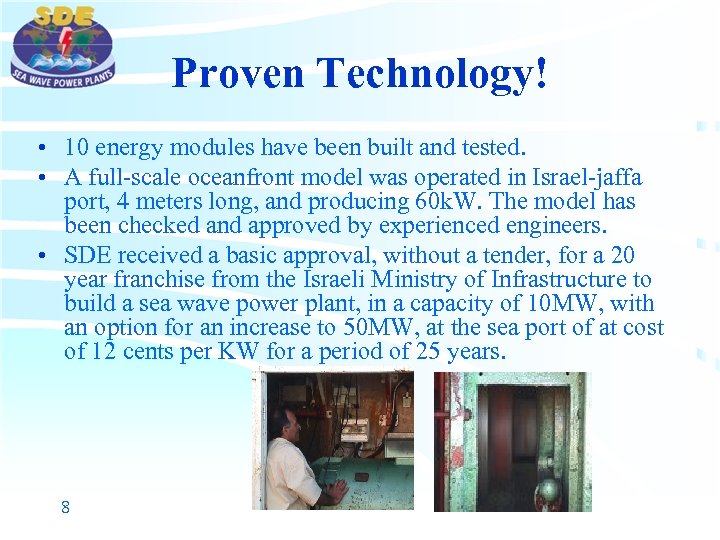 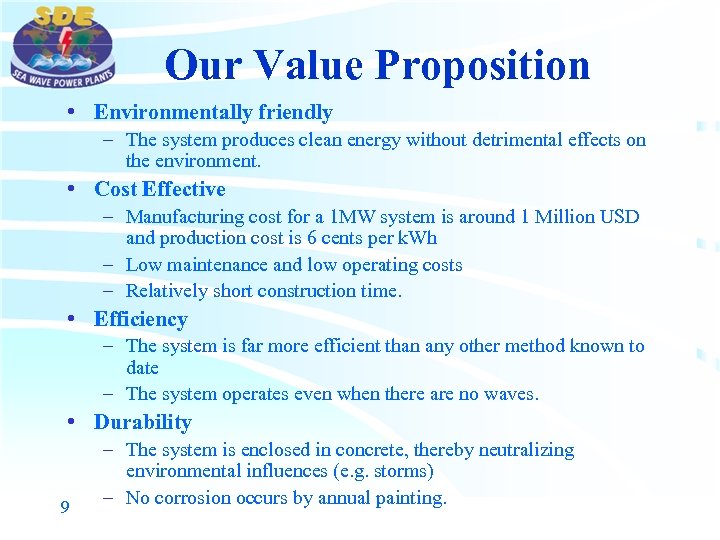 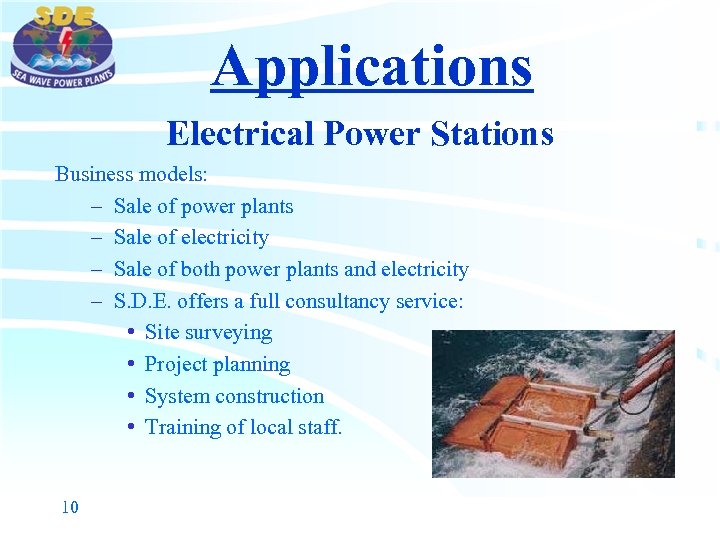 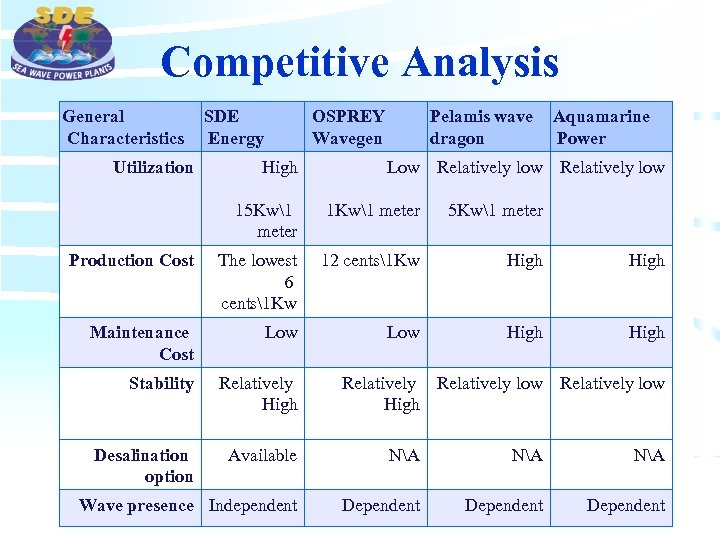 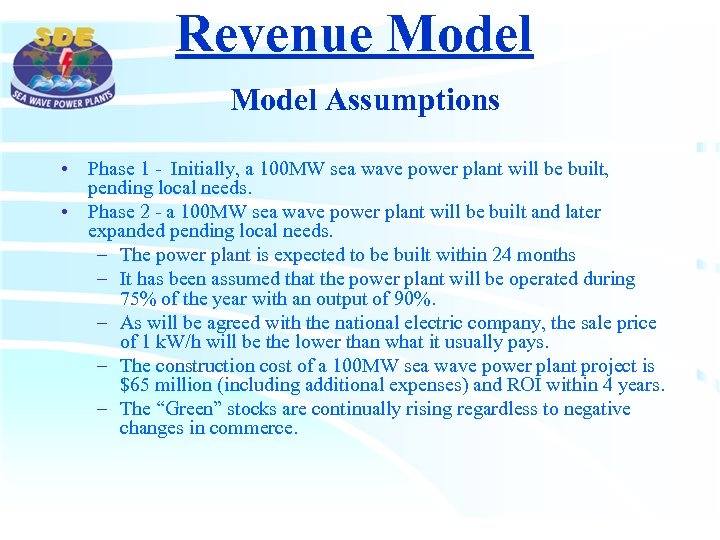 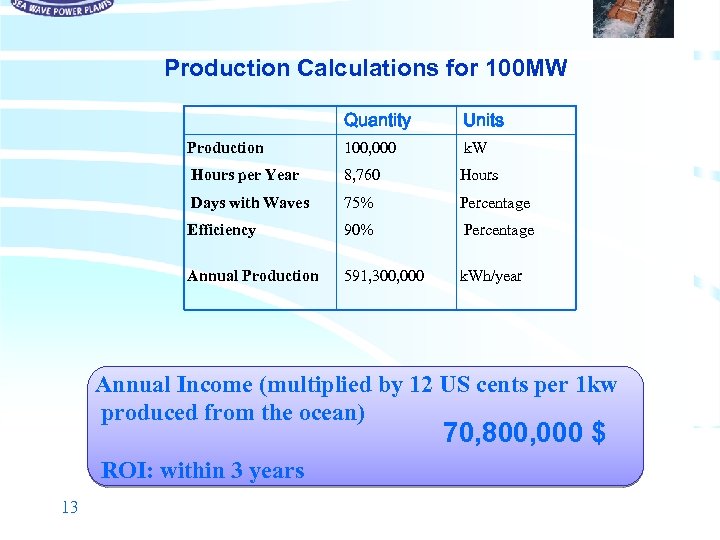 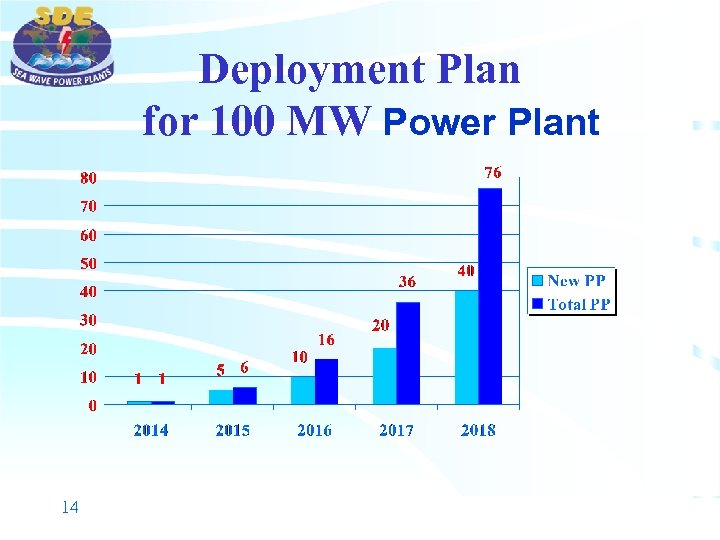 Company Profile • S. D. E. Ltd. owned by Mr. Shmuel Ovadia has developed a unique and revolutionary technology for producing electricity from sea waves, with an Israeli patent no. 120751, international PCT and pending patents. • This method for harnessing energy from sea waves has received approval and financial support of 2. 3 Million USD from the Chief Scientist of Israel’s Ministry of Industry and Trade, no. 23, 425, as of June 6, 1999. • The erection cost of a 1 MW S. D. E. station is $650, 000 while $5, 000 of solar and $2, 000 of wind. • SDE has established 10 models, the latest of them was a 60 Kw system established at Jaffa prot, Israel. The latest global establishment is a 150 Kw system in China as a milestone of a larger project planned with the local government. 2

• Using S. D. E. technology, production of electricity is 6 cents$/k. Wh, 12 cents from solar energy, and 10. 6 cents from wind. • The technology is based on the utilization of sea waves to yield hydraulic pressure, that produces electricity, while exploiting the full potential of wave speed, height, depth, rise and fall, and currents beneath the surface of the water. • The company’s main targets: – Construct sea wave power plants – Sell the sea wave electricity to the electric utility. – Sell licenses to build sea wave power plants. – Receive grants from the U. N through CDM programs. – Extend business partnerships. 3

The Need for Renewable Energy • The global demand for energy is rising rapidly. Fuel costs are escalating and will continue to do so for an indefinite future. • The damaging effects of coal burning which contribute to global warming and the destruction of the ozone layer, have triggered global efforts to cut pollution. • In order to prevent the environmental disaster predicted by scientists around the world, the EU and several other countries have decided to convert up to 20% of electricity production to non-conventional, clean methods. 5

Renewable Energy Catches More Waves • The World Energy Council estimates that 2 TWh of energy could be utilized from the world’s oceans, the equivalent of twice the world’s electricity production. • No commercial wave power plant has yet been built due to the following limitations: – Sensitivity to weather conditions – Expensive technology – Wave energy (like many other renewable sources) is unlikely to be economically competitive with conventional generation in its present form. The density of water is 800 times then air which turns sea wave energy production more attractive then other renewable methods. • S. D. E. was formed to meet the important challenges of these market demands, while positively impacting the environment we all share. 6

The S. D. E. Solution • The system generates pressurization of ocean water, which in turn causes pressure on hydraulic oil. This activates a hydraulic motor, which produces electricity. • The uniqueness of the method: – The process collects energy, not only from the visible surface waves, but also from power below the surface, inherent in ocean waves. The power harnessed from below the surface is far greater than which could be harnessed from the surface wave alone. – Constant production of electricity (despite the inconsistent nature of the sea. – The system is most efficient during summer and winter peaks of energy consumption. • Basic and robust technology with few moving parts consisting mainly of standard hydraulic and electrical equipment. • Only about 10% of the system components are immersed in the 7 seawater.

Proven Technology! • 10 energy modules have been built and tested. • A full-scale oceanfront model was operated in Israel-jaffa port, 4 meters long, and producing 60 k. W. The model has been checked and approved by experienced engineers. • SDE received a basic approval, without a tender, for a 20 year franchise from the Israeli Ministry of Infrastructure to build a sea wave power plant, in a capacity of 10 MW, with an option for an increase to 50 MW, at the sea port of at cost of 12 cents per KW for a period of 25 years. 8

Our Value Proposition • Environmentally friendly – The system produces clean energy without detrimental effects on the environment. • Cost Effective – Manufacturing cost for a 1 MW system is around 1 Million USD and production cost is 6 cents per k. Wh – Low maintenance and low operating costs – Relatively short construction time. • Efficiency – The system is far more efficient than any other method known to date – The system operates even when there are no waves. • Durability 9 – The system is enclosed in concrete, thereby neutralizing environmental influences (e. g. storms) – No corrosion occurs by annual painting.